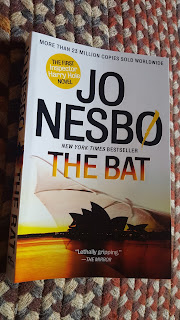 The Bat is a 1997 detective mystery by Jo Nesbo. the first in the Harry Hole series. The plot is a bit twisty, the characters are people you can care about, and the writing is straightforward without the awkwardness I sometimes see in translated works. The setting grants some insight into foreign culture and history. I've already picked up books 2 and 3 and will eventually read them all.

Inspector Harry Hole of the Oslo Crime Squad is dispatched to Sydney to observe a murder case. Harry is free to offer assistance, but he has firm instructions to stay out of trouble. The victim is a twenty-three-year-old Norwegian woman, a minor celebrity back home. Never one to sit on the sidelines, Harry befriends one of the lead detectives, and one of the witnesses, as he is drawn deeper into the case. Together, they discover that this is only the latest in a string of unsolved murders, and the pattern points towards a psychopath working his way across the country. As they circle closer and closer to the killer, Harry begins to fear that no one is safe, least of all those investigating the case.

Later books in the series were published here years ago, with this initial book being offered only recently. I'm thinking that explains the lack of truly descriptive reviews. The focus seems to be on the later, more familiar works, reviewed as they are released. I'm glad I discovered the detective as the author intended to introduce him. There's an overview at CrimeFictionLover.com.
Posted by Divers and Sundry at 4:00 AM