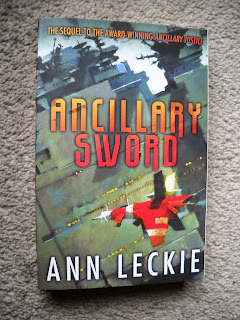 Ancillary Sword is the 2014 sequel to the science fiction novel Ancillary Justice by Ann Leckie. I was afraid this would be a disappointment. I couldn't imagine it would be as good as the first one, and yet it was. The characters are brought to life so that you care about them. The plot draws you in and carries you steadily through to the end. The ending is satisfying, not a cliff-hanger, and yet it leaves you wanting that 3rd book to come out already. I can highly recommend this series (so far). I am loving it!

You can read the first chapter of this book online at the publisher's site here.

These books should definitely be read in publication order.

Because the action has connections with rich tea plantations, and the serving of tea is an integral part of the book, I'm linking this post to the T(ea) Tuesday gathering at Bleubeard and Elizabeth's blog, where Elizabeth is looking over T Tuesday posts from the past year.


I’ve been asked if Radchaai “tea” is really tea, or if it’s perhaps just a convenient term for some sort of Space Caffeine. In fact, it’s tea. As in made from the leaves of Camellia sinensis. We sometimes call nearly any sort of vegetable matter steeped in hot water “tea” but technically speaking, if it’s not Camellia sinensis, it’s not tea. It’s probably a tisane. Many of which are quite nice! But they’re not quite, you know, tea.

and Leckie recommends a particular tea to go with the book:


There’s a named tea in Ancillary Sword: it’s called Daughter of Fishes, and best I can tell you is, it’s something like a really good oolong. So try some Ti Kuan Yin.

Leckie suggests using loose tea and provides instructions for its preparations, but concludes, "Or, you know, not, if that’s too fussy for you. The important thing is to end up with a cup of tea that you enjoy, so whatever works." I like her attitude.


Breq is a soldier who used to be a warship. Once a weapon of conquest controlling thousands of minds, now she has only a single body and serves the emperor.

With a new ship and a troublesome crew, Breq is ordered to go to the only place in the galaxy she would a agree to go: to Athoek Station to protect the family of a lieutenant she once knew -a lieutenant she murdered in cold blood.

*******
NPR has a positive review. The Book Smugglers says, "I bet everybody is thinking: will the sequel be as good as the first novel? Well, the answer is a resounding HELL YES." Eyrie calls it "an amazing book," says both books are "some of the best science fiction I've read" and rates it 9 out of 10.

Staffer's Book Review says it's "a worthy follow-up to the widely praised Ancillary Justice." Kirkus Reviews opens a positive review with this: "Leckie proves she’s no mere flash in the pan with this follow-up to her multiaward-winning debut space opera, Ancillary Justice (2013)." SF Signal closes by saying, "Ann Leckie has shown herself more than capable, and I trust that she will enthrall and amaze to round out the trilogy."

Entertainment Weekly concludes, "fans of space operas will feast on its richly textured, gorgeously rendered world-building." There are many reviews at Youtube here.
Posted by Divers and Sundry at 4:00 AM