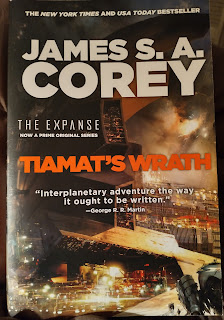 THE ENEMY IS HERE
Thirteen hundred gates have opened to solar systems around the galaxy. But as humanity builds its interstellar empire in the alien ruins, the mysteries and threats grow deeper.

In the dead systems where gates lead to stranger things than alien planets, Elvi Okeye begins a desparate search to discover the nature of a genocide that happened before the first humans existed, and to find weapons to fight a war against forces at the edge of the imaginable.

At the heart of the empire, Teresa Duarte prepares to take on the burden of her father's godlike ambition. The sociopathic scientist Paolo Cortazar and the Mephistotophelian prisoner James Holden are only two of the dangers in a palace thick with intrigue...

And throughout the wide human empire, the scattered crew of the Rocinante fights a brave rearguard action against Duarte's authoritarian regime. Memory of the old order falls away, and a future under Laconia's eternal rule -and with it, a battle that humanity can only lose- seems more and more certain.

Tiamat's Wrath is the eighth and penultimate novel in the Expanse series, a modern masterwork of science fiction.

Reviews are positive. Honestly, if you like science fiction and haven't started reading these books, jump in! Read them in order.
Posted by Divers and Sundry at 2:00 AM