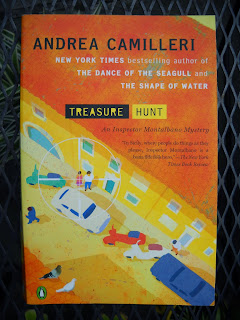 Treasure Hunt is an Inspector Montalbano mystery novel (the 16th in the series) by Andrea Camilleri. I always enjoy these books and can't recommend them highly enough. The characters are fully fleshed out and interact in realistic ways. I appreciate the balance between the somber crime elements and the more light-hearted parts. Montalbano's introspection and interpersonal relationships add a lot to my continuing enjoyment of this series. I look forward to seeing each new translation in my local bookstore. They are best read in order, as the characters age and relationships change through the series.


A hail of bullets interrupts a period of dead calm. An elderly brother and sister open fire on the plaza below their apartment, punishing the people of Vigata for their sins. News cameras film Inspector Montalbano -gun in hand- scaling the building to capture the ancient snipers. Inside he finds a nightmarish world of religious objects and a well-worn inflatable sex doll that will come back to haunt him. The Inspector is hailed as a hero after the televised adventure and calm returns. But Montalbano begins to receive cryptic messages in verse, challenging him to go on a "treasure hunt". Intrigued, he accepts, treating the messages as amusing riddles -until they take a dangerous turn.

How was it that his desk was newly covered with papers to sign? It occurred to him that if all of mankind suddenly vanished from the face of the earth, for days and days the papers to be signed would probably keep on mysteriously accumulating on the desks of the world's offices.


Want to bet this lack of courage was nothing more than an effect of aging? That's what people are like when they get old; they become excessively prudent.

How did the saying go? We're born arsonists and we die firemen.

There is mention of an un-named print by Cagli, perhaps Corrado Cagli? This Italian artist was of Jewish heritage and became a U.S. citizen, fighting in Europe during World War II. After the war, he returned to Europe, living in Rome until his death in 1976. Mentioned as being in the same room with the work by Cagli is an un-named painting by Guttuso, maybe Renato Gattuso, who is best known for his Crucifiction: 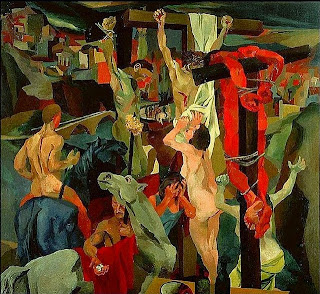 Kirkus Reviews gives it a positive review. Eurocrime closes with mixed thoughts: "As usual there is much to like about this latest Montalbano book it's funny, there's political commentary and an intriguing adversary however the ending was marred for me by its darkness..." CrimeSegments.com highly recommends it.