The Limpopo Academy of Private Detection 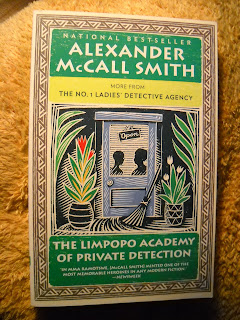 The Limpopo Academy of Private Detection is #13 in the No. 1 Ladies' Detective Agency series by Alexander McCall Smith. I'm reading these in order, and I love these characters. I've read books by this author that are not from this series and haven't liked any of his other work. This series, though, is priceless. There's less and less mystery involved, but I don't care. The characters, setting and plots are delightful! Do start with the first one, as the characters grow and relationships change.

Adapted for television, the series was cancelled after one season, because HBO didn't know a good thing when they had it. Both the books and the TV series were pastimes Mother and I both enjoyed. We read the books together and discussed them, and we watched the series together on DVD. It seems to have such wide appeal. I'll never understand why they didn't renew the show. (edit: We don't have cable, but we were so curious after reading the books that we bought the series on DVD. Well worth it.) You can watch the 2nd episode online:

Precious Ramotswe is very busy these days. The best apprentice at Tlokweng Road Speedy Motors is in trouble with the law and stuck with the worst lawyer in Gaborone. Grace Makutsi and Phuti Radiphuti are building the house of their dreams, but their builder is not completely on the up and up. Most shockingly, Mma Potokwane, the orphan farm’s respected matron, has been dismissed from her post. Mma Ramotswe is not about to rest when her friends are mistreated. Help arrives from an unexpected visitor. He is none other than the estimable Mr. Clovis Andersen, author of The Principles of Private Detection, the No. 1 Ladies’ prized manual. Together, Mma Ramotswe, Mma Makutsi, and their colleague help right injustices that occur even in their beloved Botswana, and in the process discover something new about being a good detective.

Tea figures prominently in this series, so I'm linking this post to the T(ea) Tuesday link party at Bleubeard and Elizabeth's blog. The first chapter of this book is titled, "On a Hot Day We Dream of Tea". These are my favorite tea-related quotes:


Mma Ramotswe looked first at the teapot, and then at the clock. She would wait, she decided; if one kept bringing forward the time at which one had tea, then the period after tea time would become far too long. Tea had to be taken at the right time; if anything was clear, it was that.


"I am going to make some tea. We shall drink a cup of tea."

Mma Makutsi nodded, and sniffed. "It is always the best think to do, Mma."

It was, of course. The sound of the kettle boiling was in itself the sound of normality, of reason, the sound of a fight back against the sadness of things. And the making of tea -ordinary black tea for Mma Makutsi and red bush for Mma Ramotswe- was the first step in restoring a sense of order and control into their disturbed universe. Then, sitting close together for company, nursing their mugs of tea, they began to discuss what they would do.

Kirkus Reviews has a positive review, as does EuroCrime. The Guardian says, "Fans of the series will find much to enjoy". Publishers Weekly says, "As always, the detection is secondary to Smith’s continuing exploration of the rhythms and social dynamics of smalltown African life."
Posted by Divers and Sundry at 4:00 AM