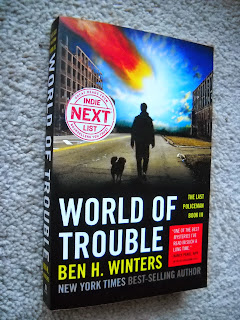 World of Trouble is the third book in the Last Policeman trilogy by Ben H. Winters. I enjoyed the first two in this series, and I am sad this is the end. I'll definitely be on the lookout for more books by him.

There are just 14 days until a deadly asteroid hits the planet, and America has fallen into chaos. Citizens have barricaded themselves into basements, emergency shelters, and big-box retail stores. Cash is worthless; bottled water is valuable beyond measure. All over the world, everyone is bracing for the end.

But Detective Hank Palace still has one last case to solve. His beloved sister Nico was last seen in the company of suspicious radicals, armed with heavy artillery and a plan to save humanity. Hank's search for Nico takes him from Massachusetts to Ohio, from abandoned zoos and fast food restaurants to a deserted police station where he uncovers evidence of a brutal crime. With time running out, Hank follows the clues to a series of earth-shattering revelations.

The third novel in the Last Policeman trilogy, World of Trouble presents one final pre-apocalyptic mystery -and Hank Palace confronts questions way beyond whodunit: How far would you go to protect a loved one? And how would you choose to spend your last days on Earth?

Paste Magazine says, "And while fans may mourn the end of The Last Policeman, they can rejoice knowing the series has been optioned for television." Seattle PI closes with this: "In the same style of the first two novels, Mr. Winters keeps the pace quick and the plot moving. While the details of the world falling apart are not as evident as they were in the first two, this novel is a fitting end, I would, however, recommend reading the first two before reading this novel." Crime Pieces calls it "a fitting ending to an unusual series." Kirkus Reviews thinks this is the weakest in the series.