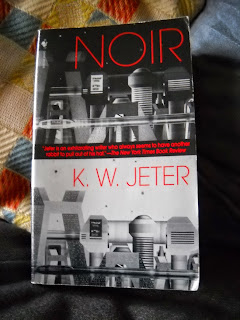 Noir is a 1998 science fiction novel by K. W. Jeter. It is noir, with both a feel for the genre and suitable characters to inhabit it. This has been on my TBR shelf for years, and I'm sorry I'm just now getting around to it. If you like the noir vibe and want something definitely different, this might be just the thing.

L>A.: the sparkling metropolis at the new center of what's left of the civilized world. Here wealthy men and women seek forbidden thrills through a system that enables them to indulge safely and anonymously in their wildest fantasies through the use of computerized simulations known as prowlers. Then a young executive at one of the world's most powerful corporations is brutally slain and an ex-information cop named McNihil is called in to find the dead man's still "living" prowler. McNihil knows he's walking into a trap. But he wants a chance to redeem himself for a botched job that forced him into retirement years ago. Teamed with a ruthless female operative called November, McNihil is about to enter a world in which no one can be trusted and things are far worse than they seem... a world in which a vast conspiracy of evil is about to blur the razor-thin line between the sane safety of daylight and the dark danger of Noir.

SF Site concludes, "In sum, a rich and fascinating book with considerable depth and many challenging ideas -- and beautifully written, too." Infinity Plus says Jeter "bends the rules to create something new without forgetting what was left behind."

Kirkus Reviews says, "By turns impressive, knowing, heavy, strained, and suffocating. Overall, it doesn’t add up to anything in particular, but it’s an uncommon experience nonetheless." Publishers Weekly closes with this: "This is a difficult, eccentric and rewarding novel, an SF equivalent, perhaps, of The Name of the Rose."
Posted by Divers and Sundry at 4:00 AM