The Garden Party and Other Stories

The Garden Party and Other Stories is a 1922 short story collection by Katherine Mansfield. She was born in 1888 and died of Tuberculosis at age 34 less than a year after this book was published. The stories can be read online.

The first story At the Bay begins with this:


Very early morning. The sun was not yet risen, and the whole of Crescent Bay was hidden under a white sea-mist. The big bush-covered hills at the back were smothered. You could not see where they ended and the paddocks and bungalows began. The sandy road was gone and the paddocks and bungalows the other side of it; there were no white dunes covered with reddish grass beyond them; there was nothing to mark which was beach and where was the sea. A heavy dew had fallen. The grass was blue. Big drops hung on the bushes and just did not fall; the silvery, fluffy toi-toi was limp on its long stalks, and all the marigolds and the pinks in the bungalow gardens were bowed to the earth with wetness. Drenched were the cold fuchsias, round pearls of dew lay on the flat nasturtium leaves. It looked as though the sea had beaten up softly in the darkness, as though one immense wave had come rippling, rippling — how far? Perhaps if you had waked up in the middle of the night you might have seen a big fish flicking in at the window and gone again. . . .

Ah–Aah! sounded the sleepy sea. And from the bush there came the sound of little streams flowing, quickly, lightly, slipping between the smooth stones, gushing into ferny basins and out again; and there was the splashing of big drops on large leaves, and something else — what was it? — a faint stirring and shaking, the snapping of a twig and then such silence that it seemed some one was listening.

Round the corner of Crescent Bay, between the piled-up masses of broken rock, a flock of sheep came pattering. They were huddled together, a small, tossing, woolly mass, and their thin, stick-like legs trotted along quickly as if the cold and the quiet had frightened them. Behind them an old sheep-dog, his soaking paws covered with sand, ran along with his nose to the ground, but carelessly, as if thinking of something else. And then in the rocky gateway the shepherd himself appeared. He was a lean, upright old man, in a frieze coat that was covered with a web of tiny drops, velvet trousers tied under the knee, and a wide-awake with a folded blue handkerchief round the brim. One hand was crammed into his belt, the other grasped a beautifully smooth yellow stick. And as he walked, taking his time, he kept up a very soft light whistling, an airy, far-away fluting that sounded mournful and tender. The old dog cut an ancient caper or two and then drew up sharp, ashamed of his levity, and walked a few dignified paces by his master’s side. The sheep ran forward in little pattering rushes; they began to bleat, and ghostly flocks and herds answered them from under the sea.

I love the descriptive language, the sense of the settings, the mood. The stories are vignettes, pictures of life and the joys and sorrows that make life what it is.

The story The Garden Party begins:


And after all the weather was ideal. They could not have had a more perfect day for a garden-party if they had ordered it. Windless, warm, the sky without a cloud. Only the blue was veiled with a haze of light gold, as it is sometimes in early summer. The gardener had been up since dawn, mowing the lawns and sweeping them, until the grass and the dark flat rosettes where the daisy plants had been seemed to shine. As for the roses, you could not help feeling they understood that roses are the only flowers that impress people at garden-parties; the only flowers that everybody is certain of knowing. Hundreds, yes, literally hundreds, had come out in a single night; the green bushes bowed down as though they had been visited by archangels.

Don't get the idea, though, that it's all descriptive. There is plenty of action, and there are plenty of conversational passages.

A review from the time of the collection's publication says,

It is necessary to read no more than two or three of Miss Mansfield's stories before discovering that she has great talent. And after reading all of them, ... there is no doubt at all that this talent amounts to the rare thing which a lack of a juster word to express our enthusiasms we call genius, and that her name must be added to that small company of the living —so small that they could all get into one Lexington Avenue car without straphanging— who really have something to say, and can say it uncommonly well.

Here's another review from the period: 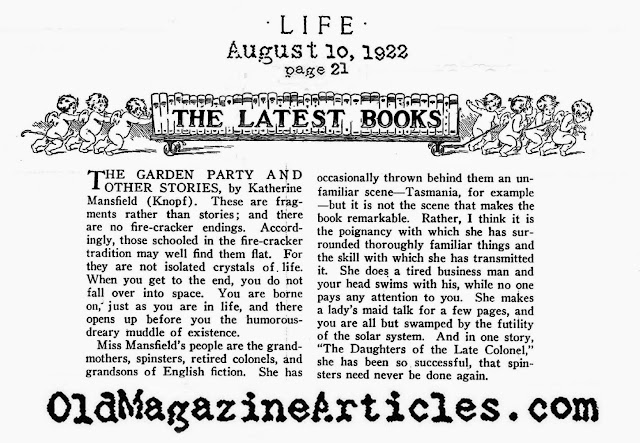 I read this as part of the 2015 Read Harder Challenge as "A collection of short stories (either by one person or an anthology by many people)".
Posted by Divers and Sundry at 4:00 AM