An Artist of the Floating World 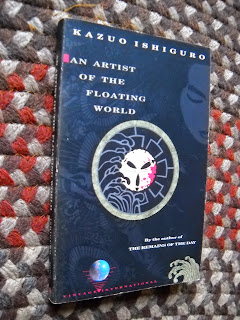 An Artist of the Floating World is a 1986 novel by Kazuo Ishiguro. Given that I don't tend to like unreliable narrators, this one still drew me in. You get a good objective view from the context, the other characters, and the plot through the book. People see their own life histories in a much different light than others who are looking in from the outside.

In the face of the misery he saw in his homeland, the artist Masuji Ono was unwilling to devote his art solely to the celebration of physical beauty. Instead, he envisioned a strong and powerful Japan of the future, and put his work in the service of the imperialist movement that led Japan into World War II.

Now, as the mature Ono struggles through the devastation of that war, his memories of his youth and of the "floating world" -the nocturnal realm of pleasure, entertainment, and drink- offer him both escape and redemption, even as they punish him for betraying his early promise as an artist. Drifting in disgrace in postwar Japan, indicted by society for its defeat and reviled for his past aesthetics, he relives the passage through his personal history that makes him both a hero and a coward but, above all, a human being.

Most reviews I'd like to quote are sadly behind a paywall. I did find a few that can be viewed online. Kirkus Reviews has a mixed review. The Independent reviewer reads it once a year and says,

The themes that fascinate me as a writer are present in this novel: regret, guilt, the malleability of memory, the pains of ageing, solitude, loneliness. Ishiguro's writing is spare, and really nothing much happens in the book at all. And yet every time after I finish reading it, I view Ono – and the world – in a slightly altered light.