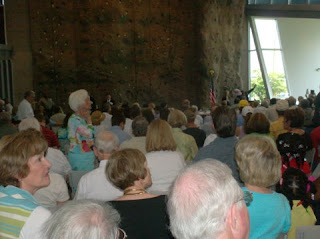 The Daughter and I got downtown about half an hour before the event was to start to find a line already snaking around the building. We got in line behind 2 women, and 2 men came up behind us.

Our first impressions began in the line. I noticed a bright red Smart Fortwo parked next to where I was standing and told The Daughter I wanted that car. She said I'd just get crushed by the SUVs, and I said that we could just outlaw those SUVs and I could drive my Smart Car without fear. One of the women in front of us was apparently eavesdropping and took me seriously, turning and making some disparaging comment about me not liking kids or something -surely not.... I tried to "friendly" it up a bit by saying that the big van we had needed when I had 3 kids in car-seats was good at the time but that now I was ready for the cute little red car. By then, though, she had turned her back on me.

The men behind us were a friendlier pair. I did eventually say something that revealed my personal views on the health care issue, and one of the men offered us each a sign to use during the meeting. Here's a photo The Daughter took of the sign: 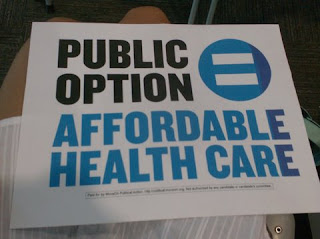 Our experience throughout the morning was this: Our political views unknown, the liberals were friendly and sociable while the conservatives were, um, not.

As we made it up closer to the door there was a young woman handing out blank index cards on which to write one's name and question. The woman ahead of us in line who had so objected to my SUV comment said, "It's about democracy!" and slapped the card from the worker's hand -actually slapping the hand of the young woman, the card falling to the ground, leaving the worker with a stunned expression on her face. At that point I decided to make sure not to sit anywhere near that angry soul for fear her slapping habits might escalate.

We got in, filled out constituent cards and worked our way into the already crowded room. We found a couple of seats in the middle of a row at the back and settled in to wait. The people on our row seemed to share our political leanings, having some pink "Health Care Now" signs that someone had handed to interested parties in the line outside.

Someone made an announcement that there were people who had come in armed. They were legally armed, with permits, but he did ask folks carrying weapons to check in with security. This request (I would have preferred a "no guns allowed" rule) brought a loud chorus of boos and the beginning of a head-ache I still have. The Daughter and I had lost sight of the Angry Slapping Woman from the line but were hoping she didn't have a gun with her.

They asked that everyone who lives in the 9th congressional district stand, and I swear the only people who remained seated were those who didn't hear the man. This was followed by laughter from those of us who actually do live in the district.

Congressman Cohen began by introducing his staff. The introductions did go on a bit, but it was interesting to hear about the staff responsibilities -what I could hear of it, that is, over the rude grumblings and occasional shouts of some of the crowd.

When it came time to actually start, the congressman began with the pledge of allegiance to the flag. Why do they do that? I didn't see a flag anywhere, but visibility was poor. Everyone stood. I knew exactly what would happen, and sure enough the "under God" phrase was shouted loudly and angrily as if to make some kind of statement. What? That God is hard of hearing? That saying it louder will convert some poor sinner? (sigh, worsening headache) After we sat, a young woman directly behind me leaned up to The Daughter and asked if she knew the words to the pledge. My darlin' daughter smiled sweetly and said, "Yes, ma'am." These people are just plain rude. What business did that young woman have accosting The Daughter in that fashion?

Doctors got a lot of time to put forth their various opinions on this issue, time that would have been better spent letting sick people without health insurance tell their stories. To be honest, I don't care what the doctors think about this any more than I care what the insurance companies think.

Questions were submitted on cards and read by his staff, which I liked because it kept people from taking a rambling 5-minutes to work up to their 5-word question. Many questions were interrupted by yells or chants. Local issues were drowned out by folks who aren't from around here. There was impatience, for example, with the question about what will become of the Pyramid. People who live here care about these things, but the people who came from other areas just to disrupt our time with our congressman were anxious to keep the focus on their own agenda.

We were lucky in our seat-mates. The woman to my daughter's left was quiet and calm. Like us, she had trouble hearing. The older man to my right thought the same things were funny that I did and made several comments (quietly) that I agreed with.

Other rows were different. A man behind us (probably attached in some way to the rude pledge woman) yelled so much the man next to him got up and moved to another seat further down that same row. Towards the end he was yelling adamantly for open microphones, and I wondered why he was there if not to hear Cohen address constituent questions and issues. In front of us were a couple of women who repeatedly called Congressman Cohen a liar, though they didn't do it loudly. "That's just not true," they kept saying. We heard a lot of that. The Daughter said, "If they already know it all, why are they here?" A man a couple of rows ahead of us stood and yelled for Mr. Cohen to "Just Shut Up!" Again, I have to wonder why he came if not to hear Cohen speak. He could have gone lots of places where the congressman isn't speaking. There was a loud man on the other side of the room and further to the front insisting repeatedly that Cohen go on record as to whether or not he'll vote for the bill. What bill, you ask? The bill that hasn't even been written yet? Yes, well Cohen rightly refused to play in that sandbox.

I felt sorry for the poor child who was made to hold up the huge sign asking that we not kill his "gigi" -whatever a "gigi" is. The congressman assured folks that no one would be killed and explained that the purpose of that part of the proposed legislation is to make sure folks are informed of options of hospice care and other end of life support services. Another big issue was abortion. The conservative group did a lot of yelling about not wanting tax dollars used to pay for abortions. It also seemed that they would much rather "illegal aliens" be left to die painful deaths by the roadside than have one dollar spent on their care. The story of the good Samaritan comes to mind, but surely they know that story.

There was some problem with the Fire Marshall complaining that aisles were being blocked, and the meeting ended early. As we were leaving there were several people saying that Cohen could do whatever he likes now that he's in office because there are no term limits and no competition, a fact that may come as a shock to former mayor Herenton, who seems to think he has a shot at this. Also as we were leaving we walked past a woman standing in the hall who told me that the sign I had in my hand was "upside down, dummy." Our level of discourse just keeps on improving... The Daughter says that woman would never win the playground fight.

And that's our first experience with Town Hall meetings. From the experience we had today we think conservatives are mean, violent, unfriendly, loud, rude, condescending and unwilling to listen. At the end of the event, The Daughter and I were quite relieved that none of these angry folks who had proven themselves prone to physical violence had pulled out one of their legally carried weapons and shot us dead. Honestly. I haven't always voted Democratic, but I'll never again vote on the same side as the conservatives I saw in action today. Never. Ever. I'll be more likely to check what they are against and vote for it.

Other local reports of this event:

Congressman Cohen's report
ShelbyWatchdog
Main Street Journal
a video report from someone who was there
Newscoma
Remixx World
The Tennessean
BlueCollarRepublican also calls us "dummies".
Born-Again Hippies, who writes, "If Cohen had announced free beer and Bar-B-Que, this crowd would have still booed" in reporting on a part of the meeting I neglected:

I knew we were in in for a long day when he read the headline from the morning's paper that said "U.S. Economy Shows Life," and a cascade of boos gushed forth from the hostile crowd.

The 2 photos in this post were taken by The Daughter at the event.
Posted by Divers and Sundry at 12:33 PM