A friend of mine knew how much I enjoyed Steve Cohen's Town Hall Meeting and invited The Daughter and me to go with her to the one at the University of Tennessee Center for the Health Sciences. There were signs prohibiting signs inside the auditorium and forbidding weapons. Security was thick as fleas. We've decided that the lack of any publicity for this event was due to fear that there would be disruption from outside agitators, as had happened at the Cohen forum, but the lack of publicity resulted in a lack of attendees. Many seats were empty. Even people scheduled to be on the panels didn't show up, so I wonder how seriously they took this event.

The event was webcast, which was written on the agenda but not announced to the audience. It is archived and can be viewed at the link.

It was scheduled to begin at 9, was to include 3 separate panels (Federal, State and Local) and was to end at noon. None of that actually happened. The start time was delayed because the moderator was late. When he did finally show up -oh, it must have been 9:30 or so- he said he was over 50 and didn't have to give an excuse. Not a good start to my experience. There was an invocation offered by Bishop William Young of The Healing Center Full Gospel Baptist Church to "the God of Abraham, Isaac and Jacob" and prayed in the name of Jesus. The moderator was Leon Gray from Clear Channel Radio, and he began by talking about some of the myths that have grown up around the idea of health care reform and the importance of debunking those myths. He then introduced panel members for the panel on "The National View," mentioning several times throughout the morning that the representative from Cohen's office had not yet come.

Joseph Kyles, vice-president of the Rainbow PUSH Coalition, was out-spoken in his support of the 1,000 page "liberal" plan currently being considered in the house. He spoke about the concept of "disproportionate share". He was clear and concise.

Calvin Anderson from Blue Cross Blue Shield of Tennessee, scheduled to be on the "Local View" panel, was on this first panel instead and I think had left before the later panel convened. He gave an overview of the history of health care reform, pointed out that there are currently 5 bills being considered (3 in the house and 2 in the Senate) and was insistent that a public option be required to abide by the exact same rules under which the insurance companies operate. Another clear, concise speaker.

Jim Kyle was on the agenda to be on the "State View" panel, but appeared here. He was next, and he was much fuzzier. He's a current candidate for governor, but I was not won over by his ability to get his point across, much less convince. Saying he had to leave at 10:30 (but not because this event wasn't important...) he talked about TennCare and his role in capping state health care expenses at 26% of the budget, leaving many uninsured. He used the phrase "cost shifting". I'm assuming that's the same concept as "disproportionate share".

Tomeka Hart, Executive Director of the Memphis Urban League, shared her knowledge of the needs and desires of Jane and John Q. Public. They just want this done. They've waited a long time already.

Brad Cobb, executive Directory of NAMI Memphis, openly insulted Jim Kyle, saying (perhaps loosely quoted, though this is the essence), "I care. It's a shame you don't." There was an audible gasp. My friend and I have not had stellar experiences in our admittedly very limited experience with NAMI locally, and I wondered how Mr. Cobb had been able to mount such a high horse. He said we need more Federal help. He said the more we talk about reform the worse it seems to get. He mentioned that 201 Poplar is not a nice place to be, and he rambled a while about the trouble the mentally ill have getting medical care in emergency rooms. He felt combative to me.

Rep. Hardaway (host of the event, for which he received continual accolades) said he will offer a bill in the fall that will, if passed, open the state insurance plan for everybody.

Michael Caudle, M.D., Vice Chancellor, Health Affairs/Government Relations UTHSC, talked about the number of people who are uninsured but noted that having an insurance card does not guarantee a doctor will provide care. He talked some about end-of-life issues.

Emily Fulmer, Lead and West TN Organizer for the Tennessee Healthcare Campaign, was one of my favorites. Short and to the point, she said that it's a shame that hard-working people in America can't get affordable health care choice.

Randy Alexander, Memphis Center for Independent Living, said we should look at what we should do and find a way to fund it rather than just saying we can't afford it. He said we must overcome the fear-mongering.

George Flinn, radiologist (and owner of 7 radiology clinics)/Shelby County Commissioner/founder and CEO of Flinn Broadcasting Corporation, talked, but I was unable to follow a coherent thread through what he said. He spoke strongly for tort reform, telling a story about a 2 plus million dollar medical malpractice settlement and seemed to be saying tort reform must happen before heath care reform can. At one point late in the going Flinn noted that doctors will never abandon their charge, that they have taken an oath, that he sees patients who can't pay and who don't have insurance.... I want to know, if this is the norm, why folks seem to be having trouble accessing health care. 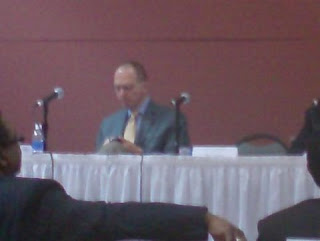 Above is a picture of George Flinn texting during the meeting while the other speakers talked. (He seemed to spend a lot of the time he wasn't talking texting. At least that's what he was doing whenever we looked in his direction.) Just checked and he wasn't tweeting, as his last tweet was in June. Maybe he was updating his Facebook status? No, he hasn't mentioned the forum on his Facebook pages. What was he saying that was too important to wait? We'll never know.

At that point, the moderator had collected the questions from audience members and began the Q&A. He said the questions about the federal aspects of the issue would be set aside and passed on to Cohen, since his representative was still not there (and yes, we know Cohen's in Africa, but a representative from his office had committed to attend).

These are the questions that got much response:

Q: What are 3 things we can do after we leave this forum?
Answers:


At this point there was a short break. When the meeting re-convened, the moderator said UT had granted us an extra 30 minutes use of the facility. Cohen's representative had finally arrived citing a "miscommunication" and said he wouldn't be answering any questions but would pass them on to Cohen. Wharton was supposed to be on the local panel but never did show up. Maybe he forgot about it in the midst of all his other excitement. It seemed that this next panel and the 3rd one had been scrapped and substituted with a panel of the willing. They all spoke, some rambling less than others. At one point the moderator called a panelist by the wrong name, and when she provided her name he told her she had talked so long he had forgotten it. Not funny. And she was not one of the longest-winded.

Rep. Hardaway interrupted the proceedings, saying he had seen a couple of people who had specific expertise to offer and would like to use 10 minutes of the Q&A time to allow them to address the forum. No one objected.

The first one must have talked 10 minutes herself. She provided endless statistical figures, and her point seemed to be that minorities are generally not as healthy as whites and get poorer health care. For a point that, I'm sure, would have been conceded readily by most folks there, she did go on and on... I got restless in my seat. Many people left.

The next woman was abusive of the privilege in a different way. She screamed into the microphone. She said she'd been diagnosed with everything we could name (Leprosy? Really?) but didn't take medications. Surely I mis-heard that... She talked about the mind controlling the body and mentioned faith a couple of times. I have no idea what her point was, but I had to hold my hands over my ears, because the sound was so loud as to be painful. She told her name and her web address. It seemed to me like she was promoting something, though I'm not sure what, and I found her participation to by highly inappropriate.

After that, another Q&A began, but we left after a few of those. As I check the video it looks like we missed about 15 minutes.

This was our second town hall meeting, and they were as different from each other as night from day. We did see one person we recognized from Steve Cohen's meeting: one of the nice men in line behind us at that event sat one row behind us on the other side of the room at this one. We didn't see him after the first panel finished.

8/23/2009: The Commercial Appeal has a report. The reporter gives most of the print space devoted to quoting panelists to the BCBS rep and Dr. Flinn.
Posted by Divers and Sundry at 1:43 PM