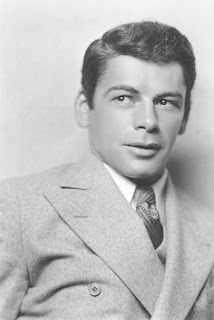 Today is the anniversary of the death in 1967 of actor Paul Muni. He has a Facebook page, which is where the photo above came from. TCM has a short biography. FilmReference.com says,

Muni required months to research his character and prepare for his performance. If the character was a historical figure, he would read every available book on the subject. If the character required a certain dialect, he would rehearse into a recorder until he was satisfied with his accent. Once filming began he would remain in character between takes and even when he was off the studio lot. Muni would literally become the person in the script, which helped to build his reputation as one of the finest character actors of his time.

Youtube has this film online in 9 sections (though there's part of it missing between parts 8 and 9), but embedding is disabled for the first part, which can be viewed at youtube. The remainder of the film should autoplay beginning with part 2 from here: [4/15/2012: this film is no longer available there]

The New York Times likens the slaughter to "that of a Shakespearean tragedy" and says, "Paul Muni as Scarface Tony Camonte gives a compelling portrayal." FilmReference.com names it as "one of the three major films (along with Little Caesar and Public Enemy) that defined the American gangster genre in the early 1930s." Senses of Cinema has a short article exploring the film.
Posted by Divers and Sundry at 5:00 AM