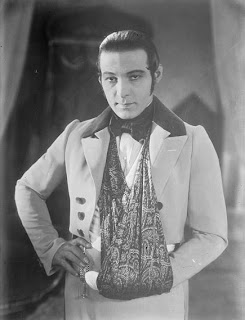 Today is the anniversary of the death in 1926 of silent film star Rudolph Valentino. FilmReference.com says,

Rudolph Valentino contrived to be a legend in his lifetime and, thanks to the ministrations of his fans and a life that was both contradictory and confused, he continues as one of the few immediately recognizable giants of the silent screen more than 50 years after his death.

His 1922 film Blood and Sand, in which Valentino plays a tragic bullfighter, is available here at Internet Archive in a "digest version," severely cut and with music and narration added. LikeTelevision has the entire film interrupted by commercials:

Posted by Divers and Sundry at 3:00 PM