The Boat of a Million Years 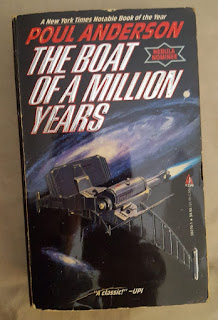 The Boat of a Million Years is a science fiction novel by Poul Anderson. from Wikipedia:

The novel follows a group of eleven immortals from the ancient past to the distant future. Most of the novel follows the various immortals throughout their lives as they try to find others like themselves, avoid being killed, and remain quiet about their gift.

There's one scene that happens at Christmas:

Yet another Christmas drew nigh, in the ship's chronology. It was meaningless to ask if it did on Earth just then -doubly meaningless, given the physics here and the forgottenness yonder. Hanno came upon Svoboda hanging ornaments in the common room. Evergreen boughs from the nanoprocessors were fresh and fragrant, bejeweled with berries of holly. They seemed as forlorn as the Danish carolsfrom the speakers.

Publishers Weekly has a plot description. SFF180 says, "The Boat of a Million Years lives up to the grandiosity of its title." Kirkus Reviews doesn't like Anderson's writing style. Worlds Without End concludes by calling it "a solidly satisfying work".
Posted by Divers and Sundry at 2:00 AM