My Night at Maud's

*note: We did not get damage from the tornadoes that went through Tennessee, but we did lose power from Friday night to Monday afternoon. I can access Facebook and Twitter on my phone, but I don't have Blogger set up that way. My FB peeps heard the Sad Saga of the lightless, heatless, waterless days and nights, and you might well count yourselves lucky to have missed out on my whining. I don't use blogger that way. I've missed y'all and hope to catch up soon!


My Night at Maud's is a 1969 French New Wave drama film directed by Éric Rohmer. It takes place during the Christmas holiday season. I watched it on HBO Max.

Eric Rohmer's "My Night at Maud's" is about love, being a Roman Catholic, body language and the games people play. It is just about the best movie I've seen on all four subjects. It is also, a refreshingly intelligent movie: not that it's ideological or academic (far from it) but that it is thoughtful, and reveals a deep knowledge of human nature.

Rotten Tomatoes has a critics consensus score of 95%. It's included in the book 1,001 Movies You Must See Before You Die.

Here's a screenshot for the folks participating in the T Stands for Tuesday blogger gathering: 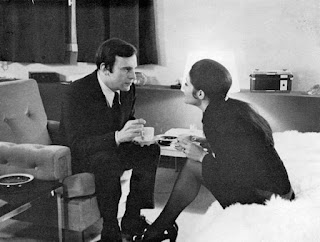