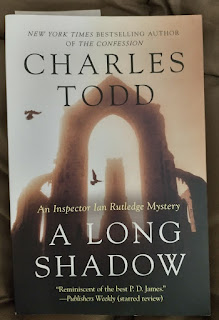 A Long Shadow is the 8th book in the Inspector Ian Rutledge mystery series by Charles Todd. This series is one of my favorites, and I get them for presents because The Husband is good to me. They should be read in order.

Scotland Yard's Inspector Ian Rutledge brought the Great War home with him, and its horrors haunt him still. On New Year's Eve 1919, he finds a brass cartridge casing, similar to countless others he'd seen on the battlefield, on the step of a friend's house. Soon there are more, purposely placed where he is sure to discover them.

Unexpectedly drawn away from London to a small Northamptonshire village, he investigates the strange case of a local constable shot with a bow and arrow in an allegedly spirit-filled wood. Here among the taciturn townfolk, embroiled in a three-year-old mystery of a vanished young girl, Rutledge hopes to keep his own ghosts at bay.

But his stalker has followed him. And now the emotionally shattered policeman walking the razor's edge of sanity must somehow keep his balance long enough to discoverwho is tracking him ... and why.

A LONG SHADOW is a seamless, substantive tale of secrets and lies, of hidden truths and heartaches. Charles Todd has once again delivered an eloquent story of suspense with a fluid style and absorbing prose on a foundation of setting so luxurious and characters so vivid I find it hard not to get lost in Rutledge's post-war world.

Kirkus Reviews has a review with a thorough plot description. Publishers Weekly says, "Todd's plotting and characterization are, as usual, first-rate, and the tormented motivations behind the novel's dark acts are presented with a sensitivity and refinement reminiscent of the best of P.D. James."
Posted by Divers and Sundry at 2:00 AM