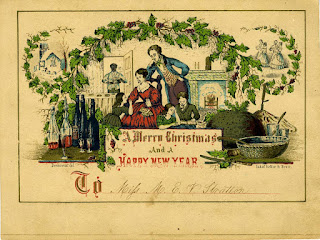 Bertie's Christmas Eve is a short story by Saki. You can read it online here. You can listen to it read to you at the bottom of this post. It begins,

It was Christmas Eve, and the family circle of Luke Steffink, Esq., was aglow with the amiability and random mirth which the occasion demanded. A long and lavish dinner had been partaken of, waits had been round and sung carols; the house-party had regaled itself with more caroling on its own account, and there had been romping which, even in a pulpit reference, could not have been condemned as ragging. In the midst of the general glow, however, there was one black unkindled cinder.

Bertie Steffink, nephew of the aforementioned Luke, had early in life adopted the profession of ne'er-do-weel; his father had been something of the kind before him. At the age of eighteen Bertie had commenced that round of visits to our Colonial possessions, so seemly and desirable in the case of a Prince of the Blood, so suggestive of insincerity in a young man of the middle-class. He had gone to grow tea in Ceylon and fruit in British Columbia, and to help sheep to grow wool in Australia. At the age of twenty he had just returned from some similar errand in Canada, from which it may be gathered that the trial he gave to these various experiments was of the summary drum-head nature. Luke Steffink, who fulfilled the troubled role of guardian and deputy-parent to Bertie, deplored the persistent manifestation of the homing instinct on his nephew's part, and his solemn thanks earlier in the day for the blessing of reporting a united family had no reference to Bertie's return.

Arrangements had been promptly made for packing the youth off to a distant corner of Rhodesia, whence return would be a difficult matter; the journey to this uninviting destination was imminent, in fact a more careful and willing traveller would have already begun to think about his packing. Hence Bertie was in no mood to share in the festive spirit which displayed itself around him, and resentment smouldered within him at the eager, self-absorbed discussion of social plans for the coming months which he heard on all sides. Beyond depressing his uncle and the family circle generally by singing "Say au revoir, and not good-bye," he had taken no part in the evening's conviviality.