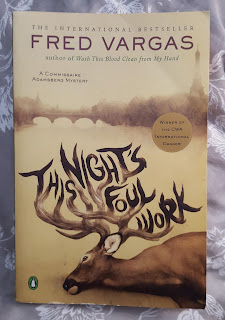 This Night's Foul Work by Fred Vargas is the 7th in the Commissaire Adamsberg mystery series. I found this and one other in the series in a used book store months ago and decided to give them a try. I enjoyed this. The characters, in particular, are engaging and the plot fascinating. I'll look for the first one when I can.


Two drug dealers are found with their throats cut in the Porte de la Chapelle, Paris, and the narcostics division of the local police is eager to wrap up the case quickly, passing the crime off as a territorial dispute between junkies.But Commissaire Jean-Baptiste Adamsberg's intuition tells him otherwise. He teams up with Dr. Ariane, a pathologist with whom he crossed paths twenty years ago and who believes the murderer is a woman.

As other murders begin to surface, Adamsberg must move quickly to stop the "Angel of Death" from killing again. With her wry narrative touch, Fred Vargas weaves a thrilling and complex mystery filled with memorable characters that will keep readers guessing up to the final page.

The Independent says, "the supreme exponent of this grand-picaresque style is Fred Vargas. Her Commissaire Adamsberg is a magnetic officer who leads a rich intellectual and sexual life, and is beloved by his team. What a baroque collection they are!"

Kirkus Reviews says the author "this time out seems unduly charmed by her own eccentricity". Publishers Weekly has a positive review but thinks the author is male. Careless, that.
Posted by Divers and Sundry at 4:00 AM