Today is the anniversary of the death in 1930 of Arthur Conan Doyle. He is best known as the creator of Sherlock Holmes, who has had quite the modern resurgence. You can read Conan Doyle's Sherlock Holmes stories online.

My favorite of the television adaptations is Jeremy Brett, and here's a video which includes some of his best quotes from season 1:

You can watch A Scandal in Bohemia, the first episode in the series, here:

Conan Doyle was by no means limited to writing about Sherlock Holmes, as he wrote many other kinds of works in addition to being a medical doctor, but Holmes is a worthy creation even if most of his other accomplishments have been forgotten.

Let's have a cuppa with the author, shall we? I'll be joining the T Stands for Tuesday blogger gathering here. 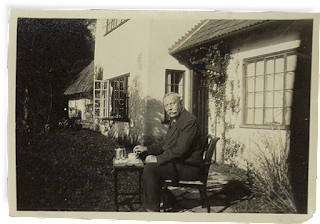 (I believe this photo to be in the public domain due to its age.)