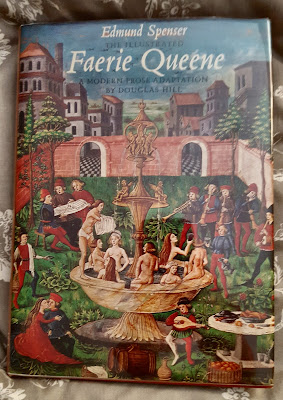 The Faerie Queene by Edmund Spenser is an epic poem written in 1590. It is notable for its form -it is one of the longest poems in the English language- as well as for being the work in which Spenser invented the verse form known as the Spenserian stanza. It was written in language considered obsolete even in its day and is now read almost entirely in adapted versions like the illustrated prose adaptation by Douglas Hill pictured above. That's the one I read, and it's a lovely choice. I think some version of this should be read at least once by everyone who claims English as their native tongue.


The Court of the Queen

ONCE upon a time, in the days when there were still such things as giants and dragons, there lived a great Queen. She reigned over a rich and beautiful country, and because she was good and noble every one loved her, and tried also to be good. Her court was the most splendid one in the world, for all her knights were brave and gallant, and each one thought only of what heroic things he could do, and how best he could serve his royal lady.

The name of the Queen was Gloriana, and each of her twelve chief knights was known as the Champion of some virtue. Thus Sir Guyon was the representative of Temperance, Sir Artegall of Justice, Sir Calidore of Courtesy, and others took up the cause of Friendship, Constancy, and so on.

Every year the Queen held a great feast, which lasted twelve days. Once, on the first day of the feast, a stranger in poor clothes came to the court, and, falling before the Queen, begged a favour of her. It was always the custom at these feasts that the Queen should refuse nothing that was asked, so she bade the stranger say what it was he wished. Then he besought that, if any cause arose which called for knightly aid, the adventure might be entrusted to him.

When the Queen had given her promise he stood quietly on one side, and did not try to mix with the other guests who were feasting at the splendid tables. Although he was so brave, he was very gentle and modest, and he had never yet proved his valour in fight, therefore he did not think himself worthy of a place among the knights who had already won for themselves honour and renown.

Soon after this there rode into the city a fair lady on a white ass. Behind her came her servant, a dwarf, leading a warlike horse that bore the armour of a knight. The face of the lady was lovely, but it was very sorrowful.

Making her way to the palace, she fell before Queen Gloriana, and implored her help. She said that her name was Una; she was the daughter of a king and queen who formerly ruled over a mighty country; but, many years ago, a huge dragon came and wasted all the land, and shut the king and queen up in a brazen castle, from which they might never come out. The Lady Una therefore besought Queen Gloriana to grant her one of her knights to fight and kill this terrible dragon.

Then the stranger sprang forward, and reminded the Queen of the promise she had given. At first she was unwilling to consent, for the Knight was young, and, moreover, he had no armour of his own to fight with.

Then said the Lady Una to him, "Will you wear the armour that I bring you, for unless you do you will never succeed in the enterprise, nor kill the horrible monster of Evil? The armour is not new, it is scratched and dinted with many a hard-fought battle, but if you wear it rightly no armour that ever was made will serve you so well."

Then the stranger bade them bring the armour and put it on him, and Una said, "Stand, therefore, having your loins girt about with truth, and having on the breastplate of righteousness, and your feet shod with the preparation of the gospel of peace; above all taking the shield of faith, wherewith ye shall be able to quench all the fiery darts of the wicked, and take the helmet of salvation and the sword of the SPIRIT, which is the word of GOD."

And when the stranger had put off his own rough clothes and was clad in this armour, straightway he seemed the goodliest man in all that company, and the Lady Una was well pleased with her champion; and, because of the red cross which he wore on his breastplate and on his silver shield, henceforth he was known always as "the Red Cross Knight." But his real name was Holiness, and the name of the lady for whom he was to do battle was Truth.

So these two rode forth into the world together, while a little way behind followed their faithful attendant, Prudence. And now you shall hear some of the adventures that befell the Red Cross Knight and his two companions.