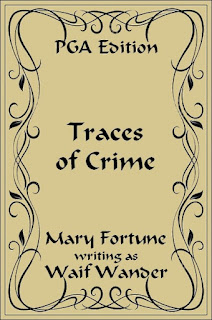 Traces of Crime is an 1865 mystery story by Mary Fortune. You can read it online here. It begins,


THERE are many who recollect full well the rush at Chinaman's Flat. It was in the height of its prosperity that an assault was committed upon a female of a character so diabolical in itself, as to have aroused the utmost anxiety in the public as well as in the police, to punish the perpetrator thereof.

The case was placed in my hands, and as it presented difficulties so great as to appear to an ordinary observer almost insurmountable, the overcoming of which was likely to gain approbation in the proper quarter, I gladly accepted the task.

I had little to go upon at first. One dark night, in a tent in the very centre of a crowded thoroughfare, a female had been preparing to retire to rest, her husband being in the habit of remaining at the public-house until a late hour, when a man with a crêpe mask—who must have gained an earlier entrance—seized her, and in the prosecution of a criminal offence, had injured and abused the unfortunate woman so much that her life was despaired of. Although there was a light burning at the time, the woman was barely able to describe his general appearance; he appeared to her like a German, had no whiskers, fair hair, was low in stature, and stoutly built.

With one important exception, that was all the information she was able to give me on the subject. The exception, however, was a good deal to a detective, and I hoped might prove an invaluable aid to me. During the struggle she had torn the arm of the flannel shirt he wore, and was under a decided impression that upon the upper part of the criminal's arm there was a small anchor and heart tattooed.

Now, I was well aware that in this colony to find a man with a tattooed arm was an everyday affair, especially on the diggings, where, I dare say, there is scarcely a person with who has not come in contact more than once or twice with half a dozen men tattooed in the style I speak of—the anchor or heart, or both, being a favourite figure with those "gentlemen" who are in favour of branding. However, the clue was worth something, and even without its aid, not more than a couple of weeks had elapsed when, with the assistance of the local police, I had traced a man bearing in appearance a general resemblance to the man who had committed the offence, to a digging about seven miles from Chinaman's Flat.

It is unnecessary that I should relate every particular as to how my suspicions were directed to this man, who did not live on Chinaman's Flat, and to all appearances, had not left the diggings where he was camped since he first commenced working there. I say "to all appearances," for it was with a certain knowledge that he had been absent from his tent on the night of the outrage that I one evening trudged down the flat where his tent was pitched, with my swag on my back, and sat down on a log not far from where he had kindled a fire for culinary or other purposes.

These diggings I will call McAdam's. It was a large and flourishing goldfield, and on the flat where my man was camped there were several other tents grouped, so that it was nothing singular that I should look about for a couple of bushes, between which I might swing my little bit of canvas for the night.

After I had fastened up the rope, and thrown my tent over it in regular digger fashion, I broke down some bushes to form my bed, and having spread thereon my blankets, went up to my man— whom I shall in future call "Bill"—to request permission to boil my billy on his fire.

It was willingly granted, and so I lighted my pipe and sat down to await the boiling of the water, determined if I could so manage it to get this suspected man to accept me as a mate before I lay down that night.

Bill was also engaged in smoking, and had not, of course, the slightest suspicion that in the rough, ordinary looking digger before him he was contemplating the "make-up" of a Victorian detective, who had already made himself slightly talked of among his comrades by one or two clever captures.

"Where did you come from mate?" inquired Bill, as he puffed away leisurely at a cutty.

"From Burnt Creek," I replied, "and a long enough road it is in such d–—hot weather as this."

"Nothing doing at Burnt Creek?"

"Not a thing—the place is cooked."

"Are you in for a try here, then?" he asked, rather eagerly I thought.

"Well, I think so; is there any chance do you think?"

"Have you got a miner's right?" was his sudden question.

"I have," said I taking it out of my pocket, and handing the bit of parchment for his inspection.

"Are you a hatter?" inquired Bill, as he returned the document.

"Well, if you have no objections then, I don't mind going mates with you—I've got a pretty fair prospect, and the ground's going to run rather deep for one man, I think."

So here was the very thing I wanted, settled without the slightest trouble.