A Good Scent from a Strange Mountain 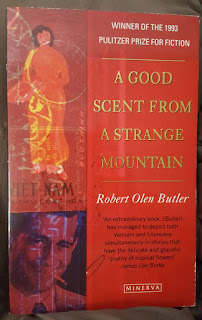 A Good Scent from a Strange Mountain is a Pulitzer Prize-winning collection of short stories by Robert Olen Butler. Wikipedia says,


Each story in the collection is narrated by a different Vietnamese immigrant living in the US state of Louisiana. The stories are largely character-driven, with cultural differences between Vietnam and the United States as an important theme.

You can read one of the stories online here. Crickets begins,


They call me Ted where I work and they've called me that for over a đecade now and it still bothers me, though I'm not very happy about my real name being the same as the former President of the former Republic of Vietnam. Thiệu is not an uncommon name in my homeland and my mother had nothing more in mind than a long-dead uncle when she gave it to me. But in lake Charles, Louisiana, I am Ted. I guess the other Mr. Thiệu has enough of my former country's former gold bullion tucked away so that in London, where he probably wears a bowler and carries a rolled umbrella, nobody's calling him anything but Mr. Thiệu.

I hear myself sometimes and I sound pretty bitter, I guess. But I don't let that out at the refinery, where I'm the best chemical engineer they've got and they even admit it once in a while.