Strange Event in the Life of Schalken the Painter 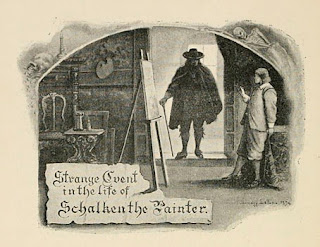 Strange Event in the Life of Schalken the Painter is an 1839 story by Sheridan Le Fanu. You can read it online here. It begins,


You will no doubt be surprised, my dear friend, at the subject of the following narrative. What had I to do with Schalken, or Schalken with me? He had returned to his native land, and was probably dead and buried, before I was born; I never visited Holland nor spoke with a native of that country. So much I believe you already know. I must, then, give you my authority, and state to you frankly the ground upon which rests the credibility of the strange story which I am, about to lay before you.

I was acquainted, in my early days, with a Captain Vandael, whose father had served King William in the Low Countries, and also in my own unhappy land during the Irish campaigns. I know not how it happened that I liked this man’s society, spite of his politics and religion: but so it was; and it was by means of the free intercourse to which our intimacy gave rise that I became possessed of the curious tale which you are about to hear.

I had often been struck, while visiting Vandael, by a remarkable picture, in which, though no connoisseur myself, I could not fail to discern some very strong peculiarities, particularly in the distribution of light and shade, as also a certain oddity in the design itself, which interested my curiosity. It represented the interior of what might be a chamber in some antique religious building — the foreground was occupied by a female figure, arrayed in a species of white robe, part of which is arranged so as to form a veil. The dress, however, is not strictly that of any religious order. In its hand the figure bears a lamp, by whose light alone the form and face are illuminated; the features are marked by an arch smile, such as pretty women wear when engaged in successfully practising some roguish trick; in the background, and, excepting where the dim red light of an expiring fire serves to define the form, totally in the shade, stands the figure of a man equipped in the old fashion, with doublet and so forth, in an attitude of alarm, his hand being placed upon the hilt of his sword, which he appears to be in the act of drawing.

‘There are some pictures,’ said I to my friend, ‘which impress one, I know not how, with a conviction that they represent not the mere ideal shapes and combinations which have floated through the imagination of the artist, but scenes, faces, and situations which have actually existed. When I look upon that picture, something assures me that I behold the representation of a reality.’

Vandael smiled, and, fixing his eyes upon the painting musingly, he said:

‘Your fancy has not deceived you, my good friend, for that picture is the record, and I believe a faithful one, of a remarkable and mysterious occurrence. It was painted by Schalken, and contains, in the face of the female figure, which occupies the most prominent place in the design, an accurate portrait of Rose Velderkaust, the niece of Gerard Douw, the first and, I believe, the only love of Godfrey Schalken. My father knew the painter well, and from Schalken himself he learned the story of the mysterious drama, one scene of which the picture has embodied. This painting, which is accounted a fine specimen of Schalken’s style, was bequeathed to my father by the artist’s will, and, as you have observed, is a very striking and interesting production.

It was adapted for television as part of the "ghost story for Christmas" tradition for BBC in 1979 as an episode of Omnibus. I can't find it available to watch.
Posted by Divers and Sundry at 4:00 AM