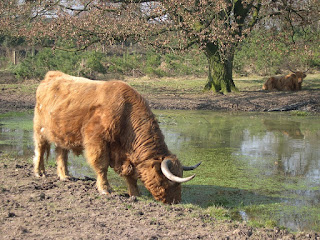 The Two Drovers is an 1827 short story by Sir Walter Scott. It is from the Chronicles of Canongate collection. This particular story was included in a 1927 Funk and Wagnalls 10-volume set titled The World’s One Hundred Best Short Stories in the volume labeled Ghosts. There are no ghosts here but only an old woman who predicts a violent end. You can read it online here. It begins,


It was the day after Doune Fair when my story commences. It had been a brisk market. Several dealers had attended from the northern and midland counties in England, and English money had flown so merrily about as to gladden the hearts of the Highland farmers. Many large droves were about to set off for England, under the protection of their owners, or of the topsmen whom they employed in the tedious, laborious, and responsible office of driving the cattle for many hundred miles, from the market where they had been purchased, to the fields or farmyards where they were to be fattened for the shambles.

The Highlanders in particular are masters of this difficult trade of driving, which seems to suit them as well as the trade of war. It affords exercise for all their habits of patient endurance and active exertion. They are required to know perfectly the drove- roads, which lie over the wildest tracts of the country, and to avoid as much as possible the highways, which distress the feet of the bullocks, and the turnpikes, which annoy the spirit of the drover; whereas on the broad green or grey track which leads across the pathless moor, the herd not only move at ease and
without taxation, but, if they mind their business, may pick up a mouthful of food by the way. At night the drovers usually sleep along with their cattle, let the weather be what it will; and many of these hardy men do not once rest under a roof during a journey on foot from Lochaber to Lincolnshire. They are paid very highly, for the trust reposed is of the last importance, as it depends on their prudence, vigilance, and honesty whether the cattle reach the final market in good order, and afford a profit to the grazier. But as they maintain themselves at their own
expense, they are especially economical in that particular. At the period we speak of, a Highland drover was victualled for his long and toilsome journey with a few handfulls of oatmeal and two or three onions, renewed from time to time, and a ram's horn filled with whisky, which he used regularly, but sparingly, every night and morning. His dirk, or SKENE-DHU, (that is, black- knife), so worn as to be concealed beneath the arm, or by the folds of the plaid, was his only weapon, excepting the cudgel with which he directed the movements of the cattle. A Highlander was never so happy as on these occasions. There was a variety in the whole journey, which exercised the Celt's natural curiosity and love of motion. There were the constant change of place and scene, the petty adventures incidental to the traffic, and the intercourse with the various farmers, graziers, and traders, intermingled with occasional merry-makings, not the less acceptable to Donald that they were void of expense. And there was the consciousness of superior skill; for the Highlander, a child amongst flocks, is a prince amongst herds, and his natural habits induce him to disdain the shepherd's slothful life, so that he feels himself nowhere more at home than when following a gallant drove of his country cattle in the character of their guardian.

Of the number who left Doune in the morning, and with the purpose we have described, not a GLUNAMIE of them all cocked his bonnet more briskly, or gartered his tartan hose under knee over a pair of more promising SPIOGS, (legs), than did Robin Oig M'Combich, called familiarly Robin Oig, that is young, or the Lesser, Robin. Though small of stature, as the epithet Oig implies, and not very strongly limbed, he was as light and alert as one of the deer of his mountains. He had an elasticity of step which, in the course of a long march, made many a stout fellow envy him; and the manner in which he busked his plaid and adjusted his bonnet argued a consciousness that so smart a John Highlandman as himself would not pass unnoticed among the Lowland lasses. The ruddy cheek, red lips, and white teeth set off a countenance which had gained by exposure to the weather a healthful and hardy rather than a rugged hue. If Robin Oig did not laugh, or even smile frequently -as, indeed, is not the practice among his countrymen -his bright eyes usually gleamed from under his bonnet with an expression of cheerfulness ready to be turned into mirth.

The departure of Robin Oig was an incident in the little town, in and near which he had many friends, male and female. He was a topping person in his way, transacted considerable business on his own behalf, and was entrusted by the best farmers in the Highlands, in preference to any other drover in that district. He might have increased his business to any extent had he condescended to manage it by deputy; but except a lad or two, sister's sons of his own, Robin rejected the idea of assistance, conscious, perhaps, how much his reputation depended upon his attending in person to the practical discharge of his duty in every instance. He remained, therefore, contented with the highest premium given to persons of his description, and comforted himself with the hopes that a few journeys to England might enable him to conduct business on his own account, in a manner becoming his birth. For Robin Oig's father, Lachlan M'Combich (or SON OF MY FRIEND, his actual clan surname being M'Gregor), had been so called by the celebrated Rob Roy, because of the particular friendship which had subsisted between the grandsire of Robin and that renowned cateran. Some people even said that Robin Oig derived his Christian name from one as renowned in the wilds of Loch Lomond as ever was his namesake Robin Hood in the precincts of merry Sherwood. "Of such ancestry," as James Boswell says, "who would not be proud?" Robin Oig was proud accordingly; but his frequent visits to England and to the Lowlands had given him tact enough to know that pretensions which still gave him a little right to distinction in his own lonely glen, might be both obnoxious and ridiculous if preferred elsewhere. The pride of birth, therefore, was like the miser's treasure -the secret subject of his contemplation, but never exhibited to strangers as a subject of boasting.

Many were the words of gratulation and good-luck which were bestowed on Robin Oig. The judges commended his drove, especially Robin's own property, which were the best of them. Some thrust out their snuff-mulls for the parting pinch, others tendered the DOCH-AN-DORRACH, or parting cup. All cried, "Good-luck travel out with you and come home with you. Give you luck in the Saxon market--brave notes in the LEABHAR-DHU," (black
pocket-book), "and plenty of English gold in the SPORRAN" (pouch of goat-skin).

The bonny lasses made their adieus more modestly, and more than one, it was said, would have given her best brooch to be certain that it was upon her that his eye last rested as he turned towards the road.

Robin Oig had just given the preliminary "HOO-HOO!" to urge forward the loiterers of the drove, when there was a cry behind him: -

"Plague on her, for an auld Highland witch and spaewife," said a farmer from the Carse of Stirling; "she'll cast some of her cantrips on the cattle."

"She canna do that," said another sapient of the same profession. "Robin Oig is no the lad to leave any of them without tying Saint Mungo's knot on their tails, and that will put to her speed the best witch that ever flew over Dimayet upon a broomstick."

It may not be indifferent to the reader to know that the Highland cattle are peculiarly liable to be TAKEN, or infected, by spells and witchcraft, which judicious people guard against by knitting knots of peculiar complexity on the tuft of hair which terminates the animal's tail.

But the old woman who was the object of the farmer's suspicion seemed only busied about the drover, without paying any attention to the drove. Robin, on the contrary, appeared rather impatient of her presence.

"What auld-world fancy," he said, "has brought you so early from the ingle-side this morning, Muhme? l am sure I bid you good-even, and had your God-speed, last night."

"And left me more siller than the useless old woman will use till you come back again, bird of my bosom," said the sibyl. "But it is little I would care for the food that nourishes me, or the fire that warms me, or for God's blessed sun itself, if aught but weel should happen to the grandson of my father. So let me walk the DEASIL round you, that you may go safe out into the far foreign land, and come safe home."

Robin Oig stopped, half embarrassed, half laughing, and signing to those around that he only complied with the old woman to soothe her humour. In the meantime, she traced around him, with wavering steps, the propitiation, which some have thought has been derived from the Druidical mythology. It consists, as is well known, in the person who makes the DEASIL walking three times round the person who is the object of the ceremony, taking care to move according to the course of the sun. At once, however, she stopped short, and exclaimed, in a voice of alarm and horror, "Grandson of my father, there is blood on your hand."

You can listen to the story here: