The Story of a Summer 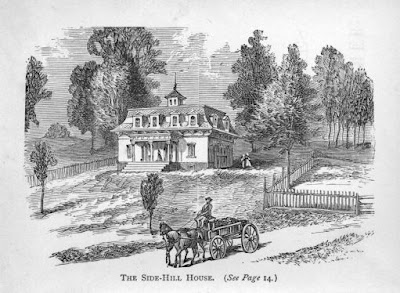 The Story of a Summer, or Journal Leaves from Chappaqua (1874), by Cecelia Cleveland, is described as "a simple record of a pleasant summer's residence at Chappaqua". I'm reading it to fulfill the non-fiction requirement for June. This is delightful! You can read it online here. It begins,

Again at dear Chappaqua, after an absence of seven months. I have not the heart to journalize tonight, everything seems so sad and strange. What a year this has been—what bright anticipations, what overwhelming sorrow!

I have just returned from a long ramble over the dear old place; first up to the new house so picturesquely placed upon a hill, and down through the woods to the cool pine grove and the flower-garden. Here I found a wilderness of purple and white lilacs, longing, I thought, for a friendly hand to gather them before they faded; dear little bright-eyed pansies, and scarlet and crimson flowering shrubs, a souvenir of travel in England, with sweet-scented violets striped blue and white, transplanted from Pickie's little garden at Turtle Bay long years ago.

Returning, I again climbed the hill, and unlocked the doors of the new house; that house built expressly for Aunt Mary's comfort, but which has never yet been occupied. Every convenience of the architect's art is to be found in this house, from the immense, airy bedroom, with its seven windows, intended for Aunt Mary, to a porte cochère to protect her against the inclemency of the weather upon returning from a drive. But this house, in the building of which she took so keen an interest, she was not destined to inhabit, although with that buoyancy of mind and tenacity to life that characterized her during her long years of weary illness, she contemplated being carried into it during the early days of last October, and even ordered fires to be lighted to carry off the dampness before she tried her new room. By much persuasion, however, she was induced to postpone her removal from day to day; and finally, as she grew weaker and weaker, she decided to abandon that plan, and journey to New York while she could. In two weeks more she had left us forever.

Our first Sunday at Chappaqua. We have a little church for a next-door neighbor, in which services of different sects are held on alternate Sundays, the pulpit being hospitably open to all denominations excepting Papists. Three members of our little household, however—mamma, Marguerite, and I—belong to the grand old Church of Rome; so the carriage was ordered, and with our brother in religion, Bernard, the coachman, for a pioneer, we started to find a church or chapel of the Latin faith. At Mount Kisco, a little town four miles distant, Bernard thought we might hear Mass, "but then it's not the sort of church you ladies are used to," he added, apologetically; "it's a small chapel, and only rough working people go there."

I was quite amused at the idea that the presence of poor people was any objection, for is it not a source of pride to Catholics that their church is open alike to the humblest and richest; so with a suggestive word from Bernard, Gabrielle's spirited ponies flew

"Over the hills, and far away."


A perpetual ascent and descent it seemed—a dusty road, for we are sadly in want of rain, and few shade-trees border the road; but once in Mount Kisco, the novelty of the little chapel quite compensated for the disagreeable features of our journey there. A tiny chapel indeed—a plain frame building, with no pretence to architectural beauty. It was intended originally, I thought, for a Protestant meeting-house, as the cruciform shape, so conspicuous in all Catholic-built churches was wanting here. The whitewashed walls were hung with small, rude pictures, representing the Via Crucis or Stations of the Cross, and the altar-piece—not, I fancy, a remarkable work of art in its prime—had become so darkened by smoke, that I only conjectured its subject to be St. Francis in prayer.

Although it was Whit-Sunday the altar was quite innocent of ornament, having only six candles, and a floral display of two bouquets. The seats and kneeling-benches were uncushioned, and the congregation was composed, as Bernard said, entirely of the working class; but the people were very clean and respectable in their appearance, and fervent in their devotions as only the Irish peasantry can be.

The pastor, an intelligent young Irishman, apparently under thirty, had already said Mass at Pleasantville, six miles distant, and upon arriving at Mount Kisco he found that about twenty of his small congregation wished to receive Communion, as it was a festival; consequently, he spent the next hour not literally in the confessional, for there was none, but in the tiny closet dignified by the name of a vestry. From thence, the door being open, we could with ease, had we had nothing better to do, have heard all of the priest's advice to his penitents.

This ceremony over, the young Father came out in his black cassock, and taking up his vestments which lay upon the altar-steps, he proceeded with the utmost nonchalance to put them on, not hesitating to display a long rent in his surplice, and a decidedly ragged sleeve.

The Mass was a Low one, and the congregation were too poor to have an organ or organist. Quite a contrast to a Sunday at St. Stephen's or St. Francis Xavier's, but the Mass is always the same, however humble the surroundings.

"DEAR SIR:—Sitting to-night 'all solitary and alone,' my mind has wandered back upon scenes that have past eleven years ago, though vivid now even as yesterday. It was about that time that I saw you first, and indeed saw you last.

"Little did I then dream that I beheld in that modest personage one who is now acknowledged as the 'distinguished and accomplished Horace Greeley.'

"You well remember your first visit to the South, I dare say. You cannot have forgotten many incidents that occurred at a little village of North Carolina, called Warrenton? No, there is one circumstance I feel assured you never can forget while memory lasts, and there are others to which I claim the right to call your attention: for instance, do you remember your first meeting with a certain Miss Cheney at the house of Squire Bragg, the father of Capt. Bragg, who lately distinguished himself at Monterey and Buena Vista? Do you now remember to whom you related the secret of your visit, who procured the parson, and what persons accompanied you to church, and then with your beautiful bride returned to breakfast? We saw you take the solemn vows, we witnessed the plighted betrothal, and when you bore away from us this prize, you also carried our best wishes that you might be ever blessed, and she be made always happy. May it not have been otherwise."

.… "I would, my dear sir, be pleased to hear from you, and to learn something of the results and changes which time has brought about in your own family.

"Be pleased to remember me to your sweet wife, and if there be any, or many little G———s, my kind regards to them also.

which struck me because it is from Germantown, TN, which was founded in 1825 and incorporated in 1841. Germantown is a suburb of Memphis,
Posted by Divers and Sundry at 4:00 AM