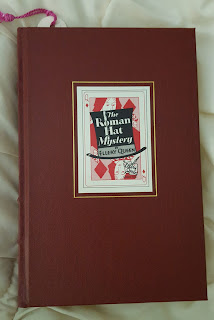 The Roman Hat Mystery is the first of the Ellery Queen detective/mystery series. This writer knows his stuff. It was written in 1928 but is still easy and interesting to read. The book was a birthday present.


The novel deals with the poisoning of a disreputable lawyer named Monte Field in the Roman Theater in New York City during a performance of a play called "Gunplay!" Although the play is a sold-out hit, the corpse is discovered seated surrounded by empty seats. A number of suspects whose pasts had made them potentially susceptible to blackmail are in the theater at the time, some connected with the Roman Theater and some audience members.

The case is investigated by Inspector Richard Queen of the Homicide Squad with the assistance of his son Ellery, a bibliophile and author. The principal clue in the mystery is the disappearance of the victim's top hat, and it is suspected that the hat may have contained papers with which the victim was blackmailing the murderer. A number of suspects are considered, but nothing can be proved until Ellery performs an extended piece of logical deduction based on the missing hat and thus identifies the murderer.