I'm trying a new-to-me thing this year. One of the earliest of Advent traditions has the observance beginning on the Feast of St. Martin, which is November 11, and there was no determined, consistent practice of shortening it to four weeks until much later and never in the Orthodox tradition. I'm observing Advent beginning with the second week in November, so this past Sunday was the first week in Advent in this practice. I'll be following what this United Methodist Church page calls Restorationist Advent. Their page says, "Advent used to be a season of seven Sundays until Pope Gregory VI shortened it to four in the eleventh century."

The Advent Project is "committed to working ecumenically to restore Advent from four (4) to seven (7) weeks". They have some resources, including O Antiphons for seven weeks and candle-lighting devotions for home use. There's another service for home use here. 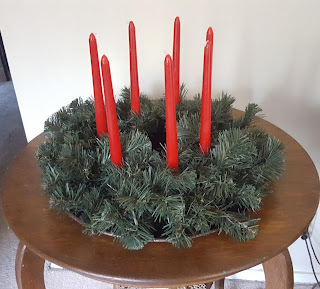 Yes, this made my Advent wreath useless, but I've made one with more candles, pictured above, that will serve. The color of the candles is irrelevant, except the Christ candle in the center -which I haven't added yet- should be white.

I have never found the time of preparation for Christmas to be stressful as some seem to, and I've always enjoyed a bit of the hustle and bustle that goes with this season, so my reasons for joining this movement have nothing to do with a reaction to commercialization or secular concerns. I'm interested in exploring this older tradition of a longer Advent as an end in itself, as a way of deepening my experience of Advent.

You can read another person's reasoning for this practice in this article from last year in The Atlantic. It begins, "Reclaiming the Calm of Christmas by Expanding Advent, By celebrating for nearly two months, one family basks in the season’s peacefulness, rather than its frenzy," and goes on to explain,


For the last two years my family has been observing Advent, the season when Christians celebrate Jesus’s birth and await his second coming, for three additional Sundays; instead of starting in December, we start in early November. This puts our family’s emphasis on the sense of expectation that defines Advent, and less so on the letters to Santa and mountains of presents that attend Christmas.

I'm finding an expanded Advent to be helpful in my personal devotions.