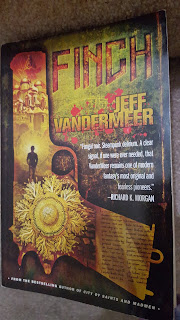 Finch is a 2009 detective mystery/dark fantasy novel by Jeff Vandermeer. This is my second time to read this as I go through my shelves. I'm always impressed by this author.

ENTER A WORLD WHERE BETRAYAL
IS JUST ANOTHER WORD FOR HONESTY

Tasked with solving an impossible double murder, detective John Finch searches for the truth among the war-weary ruins of the once-mighty city of Ambergris. Under the six-year rule of its inhuman gray cap masters, Ambergris is slowly crumbling into anarchy. The remnants of a rebel force are dispersed, their leader, the mysterious Lady in Blue, missing. Citizens are being interned in camps. Collaborators roam the streets keeping brutal order. But Finch also has to contend with new forces rising, like the enigmatic Ethan Bliss, and the contamination of his partner, Wyte, who is literally disintegrating under the strain.

The Guardian calls it "a compelling experience". The Independent says it "cleaves to the conventions of the traditional noir thriller." SF Site says, "VanderMeer's fungal milieu is still in full, fantastic flower, complimented by the many bizarre characters and creatures that Finch encounters". Publishers Weekly calls it "an engrossing recasting of the hard-boiled detective novel".