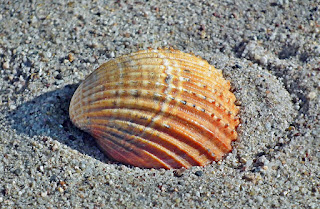 Ether Breather (1939) is the first published science fiction story of Theodore Sturgeon. You can read it online here or here. It begins,


It was "The Seashell." It would have to be "The Seashell." I wrote it first as a short story, and it was turned down. Then I made a novelette nut of if and then a novel. Then a short short. Then a three-line gag. And it still wouldn't sell. It got to be a fetish with me, rewriting that "Seashell." After a while editors got so used to it that they turned it down on sight. I had enough rejection slips from that number alone to paper every room in the house of tomorrow. So when it sold -well, it was like the death of a friend. It hit me. I hated to see it go.

It was a play by that time, but I hadn't changed it much. Still the same pastel, froo-froo old "Seashell" story, about two children who grew up and met each other only three times as the years went on, and a little seashell that changed hands each time they met. The plot, if any, doesn't matter. The dialogue was -well, pastel. Naive. Unsophisticated. Very pretty, and practically salesproof. But it just happened to ring the bell with an earnest, young reader for Associated Television, Inc., who was looking for something about that length that could be dubbed "artistic"; something that would not require too much cerebration on the part of an audience, so that said audience could relax and appreciate the new polychrome technique of television transmission. You know; pastel.

As I leaned back in my old relic of an armchair that night, and watched the streamlined version of my slow-moving brainchild, I had to admire the way they put it over. In spots it was almost good, that "Seashell." Well suited for the occasion, too. It was a full-hour program given free to a perfume house by Associated, to try out the new color transmission as an advertising medium. I liked the first two acts, if I do say so as shouldn't. It was at the half-hour mark that I got my first kick on the chin. It was a two-minute skit for the advertising plug.

A tall and elegant couple were seen standing on marble steps in an elaborate theater lobby. Says she to he:

"And how do you like the play, Mr. Robinson?"

Just like that. Like any radio-television listener, I was used to paying little, if any, attention to a plug. That certainly snapped me up in my chair. After all, it was my play, even if it was "The Seashell." They couldn't do that to me.

I've been enjoying looking for short stories to read online as I try to spend less money on books, and I always have a cup of coffee in hand: 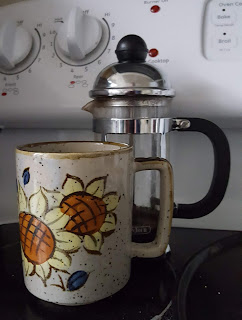 as I sit with my patio view, raining here: 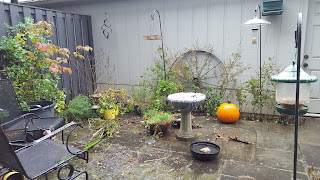 and do my googling.

Please join me as I visit the folks who participate in the T Stands for Tuesday blogger gathering hosted by Bleubeard and Elizabeth.
Posted by Divers and Sundry at 4:00 AM