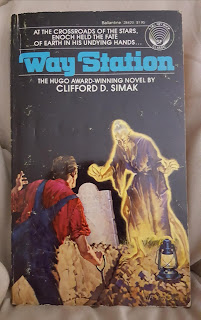 Way Station is an award-winning 1963 science fiction book by Clifford D. Simak. I discovered this author in high school, and he's always worth reading. This is probably my third or fourth time to read this book, as I make a final pass through the books on my shelves. I look forward to the upcoming Netflix adaptation.

Neighbors saw Enoch Wallace as an ageless hermit, striding across his untended farm as he had done for over a century, still carrying the gun with which he had served in the Civil War. They must never know that inside his unchanging house, he met and conversed with a host of unimaginable friends from the farthest stars.

More than a hundred years before, an lien being named Ulysses had recruited Enoch as the keeper of Earth's only galactic transfer station. Now he studied the progress of Earth as he tended the tanks where the aliens appeared, and the charts he made indicated that his world was doomed to destruction. His alien friends could only offer help that seemed worse than the dreaded disaster.

Then he discovered the horror that lay across the Galaxy...