The Raven in the Foregate 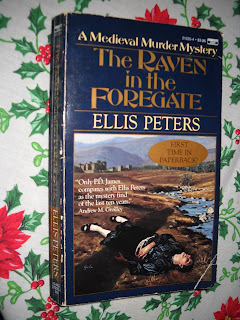 The Raven in the Foregate is the 12th book in the Brother Cadfael medieval mystery series by Ellis Peters. It's been many a long year since I last read this series, and I am re-reading the 2 that take place over Christmas. In this one the priest's body is found on Christmas morning. This book is typical of the series. I've always enjoyed the characters, the settings, the plots... I like the Jacobi interpretation. We own all the books and DVDs.

When the beloved Father Adam dies, Abbot Radulfus recommends the young priest Ailnoth for the parish of Holy Cross, known as the Foregate. Ailnoth has much to recommend him, but his zeal and lack of pity quickly alienate him from his flock. So much so that no one is truly sorry when his body is discovered in the millpond on Christmas morning.

Brother Cadfael, herbalist monk and amateur sleuth, fears murder, and because of Father Ailnoth's unholy zeal, the malefactor could he almost anyone. Worse yet, one of the prime suspects is Cadfael's friend Benet, a young man who arrived with Father Ailnoth and went right to work eagerly helping the monk in his Herbarium. With partisans of the dispossessed Empress Maud believed to he in the area, Cadfael wishes that his assistant's identity was not so clearly another piece of the mystery....

We recently watched the Derek Jacobi TV adaptation of this book, and it bears little resemblance to the book. There are some character names that are the same, and the priest does die, but otherwise the plots are quite dissimilar. The Christmas season does not figure in the tv episode.
Posted by Divers and Sundry at 9:00 AM