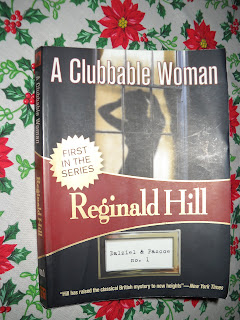 I was in the mood this year for some books that took place around the Christmas season but weren't typically Christmas-y. I did some searching on google and found several possibilities, one of which was A Clubbable Woman by Reginald Hill. This 1970 novel is the first book in a series of British detective mysteries that have been adapted for TV as Dalziel and Pascoe. The books were recommended by Viktoria in a comment on a previous post.

The events in this book occur in the days leading up to Christmas, with the celebration of that day being entirely incidental to the plot. I enjoyed this book. The characters are distinctive and their interactions interesting. I did find the wrap-up unsatisfying and unconvincing, but I'm willing to read more in the series to give the characters a chance.

Mary Connon was a small-town femme fatale, eager to test her allure on any man between 6 and 60. When she's found dead in her own living room, her husband - the one bloke to whom she never blew a kiss - comes instantly under suspicion. But Andy Dalziel, the gloriously vulgar savant of the Mid-Yorkshire police force, has some other ideas, and all of them center on the local rugby club - the town's social center, and Mary Connon's preferred hunting ground.

Peter Pascoe, Dalziel's young sergeant, suspects that his new boss's interest in the club has at least as much to do with access to good beer as it does with solving the murder. But while Dalziel never said no to a pint or three, Pascoe has much to learn about Fat Andy's uniquely effective methodology. With A Clubbable Woman - the first in an astonishing, multi-award-winning series - his education begins.

Neither as dark nor as funny as later, better Hill, with Dalziel and Pascoe (still unmarried) not yet fully-drawn--but curious and atmospheric in its moody, rugby-centered, plodding way.

Reginald Hill died this year, and Mystery Scene Magazine has a lengthy article of appreciation, saying,

The death in January 2012 of Reginald Hill, at the age of 75, has robbed crime fiction of a towering figure, one of the outstanding British mystery writers of the past half century.