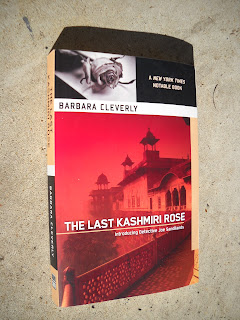 The Last Kashmiri Rose (2001) is the first in the Detective Joe Sandilands mystery series by Barbara Cleverly. It was a NYT Notable Book.

I found this book during a trip through the mystery section at my favorite local bookstore. It was randomly selected based on no good reason. I have no good reason to read more by this author. I found it slow but without characters I could get much involved in. I found the sex scenes awkward: ""Not much of a big boy, after all," she said. "Does that always happen in cold water?"" ""Coral nipples," said Joe, stooping to kiss them." It reminds me of the only paranormal romance novel I've ever read. Some of the attitudes and actions seem to me to be anachronistic, but I can't honestly prove that point. I found the women irritating. I'll skip the rest of this series and move on. I have so many authors I have yet to read.

Calcutta, 1922. In a land of saffron sunsets and blazing summer heat, an Englishwoman has been found dead, her wrists slit, her body floating in a bathtub of blood and water. But is it suicide or murder? The case falls to Scotland Yard inspector Joe Sandilands, who survived the horror of the Western Front and has endured six sultry months in English-ruled Calcutta. Sandilands is ordered to investigate, and soon discovers that there have been other mysterious deaths, with sinister ties to the present case.

Now, as the sovereignty of Britain is in decline and an insurgent India is on the rise, Sandilands must navigate the treacherous corridors of political decorum to bring a cunning killer to justice, knowing the next victim is already marked to die.

... a strong plot and a vivid sense of place are never out of style, and Cleverly is very good at developing both. Like Christie, Cleverly is adept at shepherding a large and colorful cast of characters through a complicated yet logical plot. And like Conan Doyle, Cleverly can create lush atmosphere without (in most cases) resorting to overwrought description.

Publishers Weekly opens with this:

In an impressive debut, British author Cleverly weaves an engrossing tale of serial murder and the impending decline of the British Empire into a well-written fair-play mystery set in 1920s India.

Kirkus Reviews has spoilers and closes by saying, "Her rudimentary plotting skills, however, in no way equal her sense of time and place." The Mystery Reader calls it "a richly imagined setting with a very satisfying plot". Publishers Weekly

Looks like almost everybody else likes it. I'm just proof that you can't please everybody.
Posted by Divers and Sundry at 9:00 AM