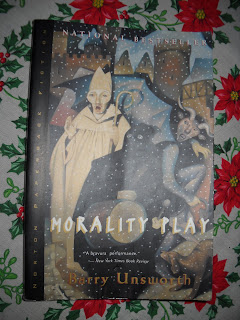 Morality Play is a 1995 medieval mystery novel by Barry Unsworth, who wrote the Booker Prize-winning mastepiece Sacred Hunger. I last read Morality Play in 2005 and am re-reading it now because it takes place at Christmas-time. This book is no masterpiece, but I'm forgiving of novels with medieval settings and enjoyed the story of this traveling troupe of players.


Short-listed for the Booker Prize, Morality Play is a medieval murder mystery full of the wonders of the time - and lessons for our own time - by a master storyteller.

It is a cold winter in the fourteenth century, and a young renegade priest, Nicholas Barber, joins an acting troupe who prepare to play the drama of their lives. Breaking the tradition of only performing religious plays, the group's charismatic leader, Martin, wants them to enact the brutal murder that has torn apart the rural village into which they have wandered. A young boy has been found dead and the weaver's daughter has been arrested and stands to be hung. As the troupe delve deeper into the circumstances of the murder, they find themselves entering a dark world of intrigue that may prove their undoing. Taut and suspenseful, Morality Play is an exquisite work that captivates by its power, while opening up the distant past as new to the reader.

The Boston Review compares it unfavorably with Sacred Hunger, saying


Morality Play ultimately fails. The historical shift from morality plays based on stock Figures to modern drama based on psychological realism was a qualitative leap: it demanded more from audiences than the absorption of didactic lessons.
...
[this book] is determined to tell modern readers about the history of drama, and that is what it does, even at the expense of its own credibility as a historical novel.


favorable comparisons to The Name of the Rose are in order, though many characters here are slender rather than fully figured, so that what could have been a truly great novel is instead only very good.