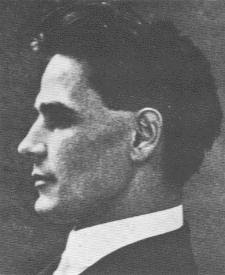 Today is the approximate anniversary of the death at Ypres in WWI in 1918 of sff/horror author William Hope Hodgson. There are some links to information about his life and works here. Victorian Web has resources. There are links to his works online here.

His most famous work is the novel The House on the Borderland, published in 1908 and available online here and here. You can listen to it at Librivox. Clark Ashton Smith called it "probably the most sustained and least faulty of Hodgson's volumes" and said,

it would be impossible to withhold the rank of master from an author who has achieved so authoritatively, in volume after volume, a quality that one might term the realism of the unreal.

Mr. Hodgson is perhaps second only to Algernon Blackwood in his serious treatment of unreality. Few can equal him in adumbrating the nearness of nameless forces and monstrous besieging entities through casual hints and insignificant details, or in conveying feelings of the spectral and the abnormal in connection with regions or buildings.

Hodgson was also a noted body builder and ran a school of "physical culture" when a young man. He appeared on stage with Houdini in response to Houdini's challenge to anyone who could bind him so he couldn't escape. PBS reports the event as part of their Houdini timeline at their American Experience site. Hodgson succeeded in the task but angered Houdini in the process.
Posted by Divers and Sundry at 5:00 AM