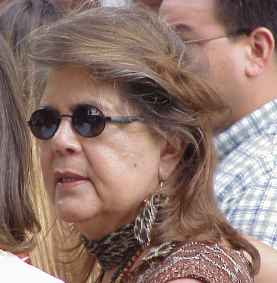 Wilma Mankiller has died. I see the news at Salon.com that "Wilma Mankiller, the first female chief of the Cherokee Nation, has died from pancreatic cancer at 64." I read her autobiography Mankiller: a Chief and Her People the year after it came out in 1999, and it is still on my book shelf.

obits:
CNN: "Mankiller served 10 years as principal chief of the Cherokee, the second-largest U.S. tribe, and became its first freely elected leader in 1987."
Cherokee Phoenix quotes Chad Smith, Principal Chief of the Cherokee Nation: "We are better people and a stronger tribal nation because her example of Cherokee leadership, statesmanship, humility, grace, determination and decisiveness."
Religion Dispatches
Posted by Divers and Sundry at 1:09 PM