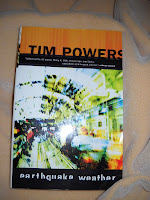 Earthquake Weather is the 3rd book in the Fault Lines trilogy by Tim Powers. I had some trouble getting through this one. A lot of things seemed to happen for me to have found it so slow, but maybe it's because it seemed to me that there were a lot of the same kinds of things happening. I have read the other 2 in this series: Last Call and Expiration Date. This is by far my least favorite of the three.

A young woman possessed by a ghost has slain the Fisher King of the West, Scott Crane. Now, temporarily freed from that malevolent spirit, she seeks to restore the King to life.

But Crane's body has been taken to the magically protected home of Pete and Angelica Sullivan, and their adopted son, Koot Hoomie. Kootie is destined to be the next Fisher king, but he is only thirteen years old--too young, his mother thinks, to perform the rituals to assume the Kingship. But not too young, perhaps, to assist in reuniting Scott Crane's body and spirit, and restoring him to life.

Dave Langford's review says, "Once again I'm awed by Powers's ability to stitch together a syncretic modern myth from fragments old and new." SFSite says, "Earthquake Weather is full of the action, suspense, twists, supernatural and home-baked magic Powers fans crave. And it's got a climax that'll make your head spin."
Posted by Divers and Sundry at 6:30 PM