"There are many horrible sights in the multiverse. Somehow, though, to a soul attuned to the subtle rhythms of a library, there are few worse sights than a hole where a book ought to be." (p. 88) 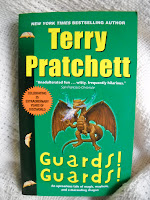 This is the 2nd book in a row I've read that contains the word "widdershins". Now what are the odds of that, I wonder. Guards! Guards! is the 8th book in the Discworld series by Terry Pratchett. Death makes a few appearances. This is one of my favorites so far.

Here there be dragons...and the denizens of Ankh-Morpork wish one huge firebreather would return from whence it came. Long believed extinct, a superb specimen of draco nobilis ("noble dragon" for those who don't understand italics) had appeared in Discworld's greatest city. Not only does unwelcome visitor have a nasty habit of charbroiling everything in its path, in rather short order it is crowned king (it's a noble dragon after all)

Meanwhile, back at Unseen University, an ancient and long-forgotten volume -The Summoning of Dragons- is missing from the library's shelves. To the rescue come Captain Vimes,Constable Carrot, and the rest of the Night Watch who, along with other brave citizens, risk everything, including a good roasting, to dethrone the flying monarch and restore order to Ankh-Morpork (before it's burned to a crisp). A rare tale, well done as only Terry Pratchett can.

SFReviews.net says it is "as enjoyable a Discworld opus as most any of the others, and an important volume in the series' evolution from "silly and diverting" to "silly, diverting, stone brilliant, and on everybody's reading list."" SFSignal suggests it as a good entry point for the series.

I have read these other books from this series:
The Color of Magic
The Light Fantastic
Equal Rites
Mort
Sourcery
Wyrd Sisters
Pyramids