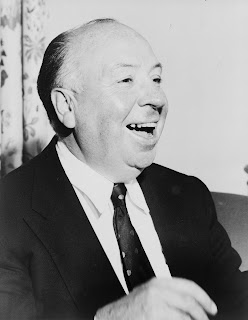 Today is the anniversary of the death in 1980 of Alfred Hitchcock. The Museum of Modern Art has an exhibition which includes a lengthy 1963 interview with Hitchcock. Senses of Cinema has a long, foot-noted article. The BBC has excerpts from audio interviews. PBS devotes part of its American Masters site to him. Images Journal has several articles. Bright Lights Film Journal has photos highlighting Hitchcock's recurring themes. FilmReference.com has an article and extensive resource lists. BFI has a print interview from 1967. Salon.com takes a contrarian view, saying he "may be the prime example of a film legend whose reputation has come to overpower any realistic view of his work." There's a big Alfred Hitchcock Facebook page. There's a list of his cameo appearances in his films here.

FilmStudiesForFree has embedded a 1973 6-part video interview with Tom Snyder and Hitchcock. Hulu has full episodes of Alfred Hitchcock Presents.

I have blog posts on the following Hitchcock films, many of which are viewable online: