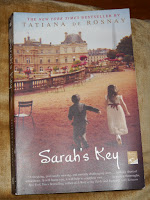 Sarah's Key by Tatiana de Rosney is a novel based on historical events during the French occupation and the French complicity with the horrors inflicted on Jews in that country.

Paris, July 1942: Sarah, a ten-year old girl is taken with her parents by the French police as they go door-to-door arresting Jewish families in the middle of the night. Desperate to protect her younger brother, Sarah locks him in a bedroom cupboard -their secret hiding place- and promises to come back for him as soon as they are released.

Sixty years later Sarah's story intertwines with that of Julia Jarmond, an American journalist investigating the roundup. In her research, Julia stumbles onto a trail of secrets that links her to Sarah, and to questions about her own romantic future.

The story was touching, but I didn't care for the writing style. It seemed repetitive to me. There was an unusual dependence on multiple coincidences that stretched belief. I wish I had kept track of all the phrases and other elements that pulled me out of the story, but I'm unwilling to look back through for examples.
Posted by Divers and Sundry at 4:00 PM