Our Time is a 1974 coming-of-age drama film dealing with the difficulties of adolescence including an unplanned pregnancy. It was renamed Death of Her Innocence and aired on television in 1978. I find it particularly relevant for these dark days when rights are being stripped away from women. It's set in the 1950s, which seems to be where some folks wish we lived.

You can watch the film at Youtube at this link. Here's a screenshot from early in the film: 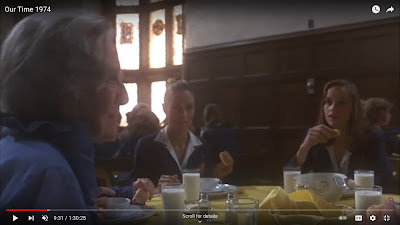 This is my offering for the T Stands for Tuesday blogger gathering. I won't be having milk. No. I think I'll have a gin and tonic and mourn.

I support abortion rights as a private matter between a woman and her health care provider.
A fertilized egg is not a baby.
Abortion isn't murder.
Many women don't even know they're pregnant at that 6-week period you hear talked about.
Plan B is a birth control option and does not cause abortion.
There is no "fetal heartbeat" at 6 weeks. An ultrasound can detect an inaudible flutter in the area where the heart will eventually form. That that term has become common in the general public is a damn shame. It's a lie.
At 6 weeks it's not a fetus but an embryo.
I hear precious few in the anti-abortion movement discuss fertility clinics, where fertilized eggs are destroyed as a matter of routine.

I may add more here later, but that'll do for a start.
Posted by Divers and Sundry at 2:00 AM