Memento is a 2000 neo-noir mystery thriller film about a man who suffers from anterograde amnesia, resulting in short-term memory loss and the inability to form new memories. He is searching for the people who attacked him and killed his wife. It has a nonlinear plot development, which I admit I don't care for in books or movies. This film is not one where you can do other things while you watch. It requires attention throughout. I watched it on HBO Max.

"So you lie to yourself to be happy. There's nothing wrong with that. We all do it." -Teddy

The Guardian has a positive review and says,

Memento takes, as a starting point, the idea that memories are the building blocks of what makes us human: they inform our sense of self, our relationships with other people, our basic grounding in time and space. And in a genre known for unreliable narrators, memory makes for a shifty central character, telling Leonard (and us) things that turn out not to be true.

The movie is more like a poignant exercise, in which Leonard's residual code of honor pushes him through a fog of amnesia toward what he feels is his moral duty. The movie doesn't supply the usual payoff of a thriller (how can it?), but it's uncanny in evoking a state of mind.

Rotten Tomatoes has a critics consensus score of 93%, and their audience score is even higher. This film is included in the book 1,001 Movies You Must See Before You Die.

I'm having a refreshing glass of ice water: 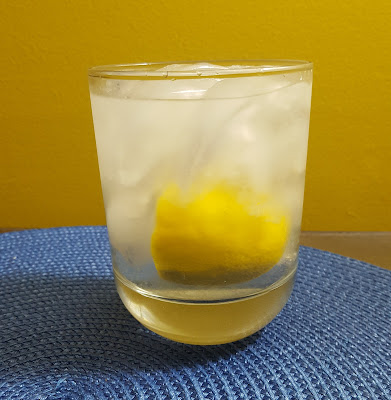 I'd been planning on joining in the T Stands for Tuesday blogger gathering but won't be able to this week and maybe next. You are welcome to participate, though, assured of a warm welcome by other participants.
Posted by Divers and Sundry at 2:00 AM

Labels: 1001 Movies You Must See Before You Die, Film, Tea/Coffee, video