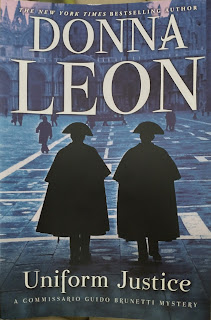 Uniform Justice is the 12th book in the Commissario Guido Brunetti mystery series by Donna Leon. I'm enjoying this series, filling in as I get books in the series for birthday and Christmas presents. Though I guess it would be helpful to read these in order, it's not strictly speaking necessary with this series. I enjoy the characters, that their relationships are fully formed but not distracting from the plot, the food descriptions, the intriguing plots, and the atmosphere. It feels like you're in Venice.

In Uniform Justice, a Publishers Weekly Book of the Year, a young cadet in Venice's elite military academy has been found hanged, a presumed suicide. Commissario Guido Brunetti's sorrow for the boy, so close in age to his own son, is rivaled only by his contempt for a community that is more concerned with protecting the reputation of the school, and its privileged students, than with finding the truth. The young man's father is a doctor and former politician. He is a man of impeccable integrity, all too rare in Italian politics. Yet, although clearly devastated and convinced that the death of his son could not have been a suicide, he inexplicably avoids talking to the police. As Brunetti pursues his inquiry, he is faced with a wall of silence. Is the military protecting its own? And what is preventing the other witnesses from talking? Or has Brunetti uncovered a conspiracy far more sinister than that of a single death?

Uniform Justice is a riveting, pitch-perfect murder mystery—the work of a truly masterful storyteller. Conjuring contemporary Venice in exquisite and alluring detail, Donna Leon offers what has been widely hailed as the finest installment yet of the Commissario Guido Brunetti series.

A powerful indictment of an Italian society in which “scandal had the same shelf life as fresh fish: by the third day, both were worthless; one because it had begun to stink, the other because it no longer did.”

Reviewing the Evidence says, "The author has produced her usual impeccable work." Publishers Weekly concludes, "This is an outstanding book, deserving of the widest audience possible, a chance for American readers to again experience a master practitioner's art."
Posted by Divers and Sundry at 2:00 AM