Buddy Holly is Alive and Well on Ganymede 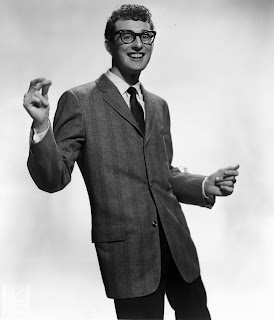 Buddy Holly is Alive and Well on Ganymede is a 1991 comic science fiction novel by Bradley Denton. If you like this kind of thing it's fun as can be. You can read it online here. It begins,


"The Midwest has a lot to answer for."

In life, their names were linked for only a few cold, miserable weeks.

In death, their names became a Trinity, as if carved into the same tablet of sacred stone.

Years later, we would look back with longing and say that the music had died.

We should have known better.


Sam Cooke's death was a turning point for Mother as well. It was the impetus that started her down the path to true weirdness. She wrote, All things beautiful are doomed. The purer the voice, the truer the vision, the more vibrant the song, the sooner death comes for the perpetrator.

The only way to escape this truth is to deny the reality from which it has been created, to exist in some other universe altogether.

So it is time to believe in flying saucers. Dianetics is worth serious consideration. Lee Harvey Oswald acted alone. Mississippi welcomes visiting Jews. Vietnam will become the fifty-first state. My son Oliver is the reincarnation not only of Buddy Holly, but of the Buddha. Mama is the reincarnation of Lot's wife. I can fly to the moon if I tape a photograph of John Glenn to my forehead.


I had no way of divining that in Memphis, Tennessee, the forty-two-year-old King of Rock and Roll had less than three days left to live.