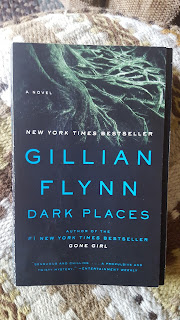 Dark Places is a 2009 award-winning mystery book by Gillian Flynn. I've seen some descriptions calling it "disturbing," but I didn't find it so. It seemed not unusual for a book featuring a woman who endured a family tragedy as a child. I found not a single sympathetic character here and no one I could identify with. It was an easy read, but there were elements I didn't like. Those include a child abuse subplot.

It was adapted for film, but to be honest I didn't even know that. I've got no interest in seeing the movie.


Libby Day was seven when her mother and two sisters were murdered in "The Satan Sacrifice" of Kinnakee, Kansas. She survives -and famously testified that her fifteen-year-old brother, Ben, was the killer. Twenty-five years later, the Kill Club -a secret society obsessed with notorious crimes- locates Libby and pumps her for details. They hope to discover proof that may free Ben. Libby hopes to turn a profit off her tragic history: She'll reconnect with the players from that night and report her findings to the club -for a fee.

As Libby's search takes her from shabby Missouri strip clubs to abandoned tourist towns, the unimaginable truth emerges, and Libby finds herself right back where she started -on the run from a killer.

The New York Times describes it as a "nerve-fraying thriller". The Guardian concludes, "The time-split narrative works superbly, and the atmosphere is eerily macabre - Dark Places is even better than the author's award-winning Sharp Objects". The New Yorker calls it a "well-paced story".

Kirkus Reviews closes with this: "For most of the wild story’s running time ... every sentence crackles with enough baleful energy to fuel a whole town through the coldest Kansas winter." Pantheon Magazine says, "As with any thriller worth its salt, the whodunit defers to the why, and that why is at once sad and poignant." Publishers Weekly says it "tops her impressive debut".