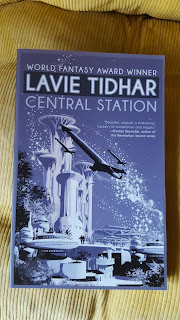 Central Station is an award-winning 2016 science fiction novel by Lavie Tidhar. I've been trying to read more recent science fiction lately, although that's not an inexpensive endeavor. Our public library has stopped requiring a SS# to get a card, so I'll check them out as a source. I bought this one new at our local bookseller. I'm glad I came across this book. It's a novel crafted from interrelated short stories.


A quarter of a million people have settled at the base of a space station in Tel Aviv. Cultures collide in real life and virtual reality. Humans, machines, and Others are interconnected through a flowing digital consciousness. Life may be cheap, but data is cheaper.

When Boris Chong reluctantly returns to Central Station from Mars, he finds utter chaos. His ex-lover is rausing a child who taps into minds with the touch of a finger. Boris's father has a multigenerational mind-plague. His space-faring cousin is infatuated with a cyborg robotnik. And an erratic data-vampire has followed Boris home....


There comes a time in a man's life when he realises stories are lies. Things do not end neatly. The enforced narratives a human impinges on the chaoic mess that is life become empty labels, like the dried husks of corn such as are thrown down in the summer months from the adaptoplant dwellings, to litter the streets below.


Central Station held together. It is just this side of a masterpiece — short, restrained, lush — and the truest joy of it is in the way Tidhar scatters brilliant ideas like pennies on the sidewalk. He has pockets full of them. Enough here for 10 books, easy.

But the best compliment I can give this one is that as soon as I finished it, I sighed, smiled, closed the back cover, then turned the whole thing 'round and immediately started over again at Page 1.

Fantasy Book Review says, "It is a collection of short stories that are all tied together with an overarching plot, and it touches on things like faith, evolution, discrimination, and more." Strange Horizons says, "Apart from the amazing world-building, it’s all about the meeting, intermingling, and interacting of many cultures...". The New York Review of Science Fiction closes with this: "mature readers who are willing to sit down in Miriam Jones’s bar, have a drink, and watch the passing Tel Aviv scene will be amply rewarded."

Publishers Weekly says, "Readers of all persuasions will be entranced." Ars Technica says it "offers a realistically weird picture of life on a far-future space station." Kirkus Reviews has an interview with the author.

Locus Online says, "Somehow, Central Station combines a cultural sensibility too long invisible in SF with a sensibility which is nothing but classic SF, and the result is a rather elegant suite of tales." SF Crowsnest closes a positive review by saying, "At the end of the book, I was left with a mellow feeling of contentment and the impression that I’d enjoyed a relaxing holiday in the company of some intriguing characters."

This book counts towards my book challenge, being on the list of NPR Best Books of 2016.
Posted by Divers and Sundry at 4:00 AM