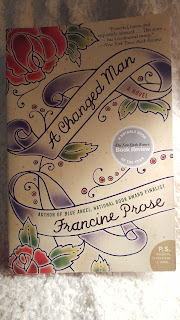 A Changed Man is a 2005 novel by Francine Prose. I bought this used some time ago, and it's been on my to-be-read shelf ever since. So many books, so little time.... I found this a little too optimistic for my taste.

What is charismatic Holocaust survivor Meyer Maslow to think when a rough-looking young neo-Nazi named Vincent Nolan walks into the Manhattan office of Maslow's human rights foundation and declares that he wants to "save guys like me from becoming guys like me"? As Vincent turns into the kind of person who might actually be able to do this, he also transforms those around him: Meyer Maslow,
who fears heroism has become a desk job; the foundation's dedicated fund-raiser, Bonnie Kalen, an appealingly vulnerable divorced single mother;
and even Bonnie's teenage son.

Francine Prose's A Changed Man is a darkly comic and masterfully inventive novel that poses essential questions about human nature, morality, and the capacity for personal reinvention.

The New York Times calls it "powerful, funny and exquisitely nuanced". The Guardian has a less positive review saying, "Her faith in America and the essential innocence of its inhabitants turns what could have been a challenging read into a witless fable for our times." New York Magazine opens with, "In A Changed Man, Francine Prose unloads on do-gooder hypocrisy and a media with blinders on." The New Yorker concludes, "As a sendup, the book is quite fun, but too often Prose’s writing falls victim to the very earnestness that she satirizes."

Kirkus Reviews calls it "An edgy, riveting tale, one of Prose’s most interesting." Publishers Weekly says, "this tale hits comic high notes even as it probes serious issues".