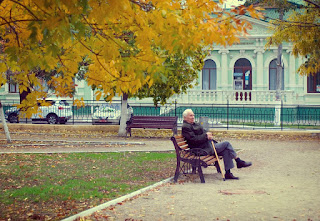 Two Thanksgiving Day Gentlemen is a 1907 short story by O. Henry. You can read it online. It begins,


There is one day that is ours. There is one day when all we Americans who are not self-made go back to the old home to eat saleratus biscuits and marvel how much nearer to the porch the old pump looks than it used to. Bless the day. President Roosevelt gives it to us. We hear some talk of the Puritans, but don't just remember who they were. Bet we can lick 'em, anyhow, if they try to land again. Plymouth Rocks? Well, that sounds more familiar. Lots of us have had to come down to hens since the Turkey Trust got its work in. But somebody in Washington is leaking out advance information to 'em about these Thanksgiving proclamations.

The big city east of the cranberry bogs has made Thanksgiving Day an institution. The last Thursday in November is the only day in the year on which it recognizes the part of America lying across the ferries. It is the one day that is purely American. Yes, a day of celebration, exclusively American.

And now for the story which is to prove to you that we have traditions on this side of the ocean that are becoming older at a much rapider rate than those of England are--thanks to our git-up and enterprise.

Stuffy Pete took his seat on the third bench to the right as you enter Union Square from the east, at the walk opposite the fountain. Every Thanksgiving Day for nine years he had taken his seat there promptly at 1 o'clock. For every time he had done so things had happened to him -Charles Dickensy things that swelled his waistcoat above his heart, and equally on the other side.

But to-day Stuffy Pete's appearance at the annual trysting place seemed to have been rather the result of habit than of the yearly hunger which, as the philanthropists seem to think, afflicts the poor at such extended intervals.

Certainly Pete was not hungry.

You can listen to it read to you here: