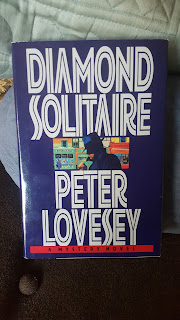 Diamond Solitaire by Peter Lovesey is the 2nd book in the Peter Diamond mystery novel series. This was a fun read, and I'll gladly pick up another when I come across one. Lovesey stole my heart by including a high-ranked sumo wrestler as one of the plot elements.

No one saw the small Japanese child hiding in the furniture department at Harrods. She was abandoned and unable to speak, yet she caused a major alert. Spotting any intruder after the store closed had been ex-CID man Peter Diamond's job. Had been.
The oversight had gotten the overweight Diamond sacked ... again.

Working as a security guard is, at any rate, far below the superior talents of an experienced homicide detective. Unable to forget the frightened eyes of this strangely silent little girl, Diamond takes on a challenge befitting his skills -uncovering her identity. And when Japan's top sumo wrestler takes an interest in the case Diamond is back in the sleuthing business, bolstered by the wrestler's international influence and his heavy wallet.

But Diamond soon discovers he has to throw his considerable weight around when the trail leads to New York and Tokyo, to "smart" drugs and suicide ... to the mafia and murder. With the girl's life in the balance, he needs to tip the scales any way he can, even if it means playing the heavy in a shocking climax that may shatter Diamond's heart -or cost him his life.

Kirkus Reviews concludes a positive review with this: "Polish up the Gold Dagger; Lovesey's angling for another." The Independent has a positive review. Publishers Weekly closes by saying, "Lovesey's mysteries have won awards in England and France; he has previously been nominated for an Edgar, as he could be again for this fine tale. Author tour."
Posted by Divers and Sundry at 4:00 AM