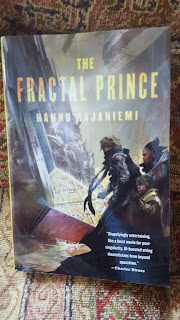 The Fractal Prince is the second book in the Jean le Flambeur science fiction trilogy by Hannu Rajaniemi. These are fascinating in some ways, but I know so precious little about physics (what the heck does it mean to surf a deficit angle, for example) that I'm thinking understanding what is going on is just more effort than it's worth to me. Seen as a work of art, I applaud it. Seen as a book that might have a plot in there somewhere if only I could figure it out, I find it lacking. A bit more explication of the concepts would've gone a long way. I'm going to skip book three.

In Hannu Rajaniemi's dazzling debut novel, THE QUANTUM THIEF, he introduced us to future like no other -a Solar System physically re-shaped by posthuman intelligences and shot through with ubiquitous IT.

It is a world in which quantum effects can be manipulated by the powerful to unknowable ends; an era in which some are gods and others are dead souls, kept alive for their processing power. Where in the inner Solar System, the Sobornost endlessly iterate themselves in vast, planet-sized guberniyas -while casually running experiments on the photosphere of the sun.

It is a world of barbaric adventure in the outer system, of mad warrior cultures and a race of hyperadvanced humans descended from an MMORPG guild.
A Solar System marked by the fragments of Jupiter-that-was ... and where on Earth, in a city of shadow players and jinni, two sisters contemplate a revolution.

In this world, the thief Jean le Flambeur had to break out of prison -and find the truth about his many previous selves, a truth he had hidden long ago. This Jean has now done, but he is still not free.

To pay his debts he must now break into the mind of a living god. On the edges of physical space, he must open a Schrodinger box -one protected by codes that twist logic and sanity. In the box is his freedom. Or not.

The Guardian concludes a positive review by saying, "Thoughtful, hard, densely realised and highly patterned, there's nothing quite like it in contemporary SF." Strange Horizons has a mixed review, concluding, "I remain doggedly optimistic about book three." Kirkus Reviews has a mixed review, calling it "intimidating" but "mostly, rewarding". From SF Signal: "BOTTOM LINE: A follow up to The Quantum Thief that ultimately has major problems of accessibility."

SF Site closes with this:

The Fractal Prince is a fantastic ride through a world whose mores, conventions, and inhabitants have been shaped through technology that can alter, bend, and twist reality and human memory. The novel rides the edge where hard science fiction meets the avant-garde, with a grand sense of style and adventure. With all that going on, the book's greatest achievement may be that the main characters, no matter what body or form they happen to be inhabiting, are at their emotional core still human, full of hopes and fears, with stories of their own to tell.

The Green Man Review quotes another reviewer as saying, “You don’t need a degree in mathematical physics to read this book, but it helps” but also praises the storytelling saying, "This may just be the most interesting ongoing series in science fiction right now. First Lupin, then Scheherezade — just what imposing literary spirit will this practiced dabbler channel next?"
Posted by Divers and Sundry at 4:00 AM